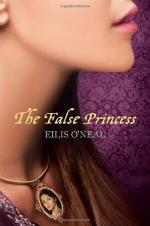 Eilis O'Neal
This Study Guide consists of approximately 31 pages of chapter summaries, quotes, character analysis, themes, and more - everything you need to sharpen your knowledge of The False Princess.

This detailed literature summary also contains Topics for Discussion on The False Princess by Eilis O'Neal.

Sinda Azaway is living the life of a princess in Vivaskari just after her sixteenth birthday when she learns she is really the daughter of a weaver who has been forced to live as a stand-in for the true princess. This exchange occurred due to a prophecy that indicated the princess would die before her sixteenth birthday. Sinda is sent away to live with her only surviving relative, an aunt who is a dyer in the tiny village of Treb. There, Sinda works hard but has few skills that will help her survive the life of a poor peasant. When she begins to feel magic surging through her body, her aunt relates the story of her mother, who was also magic. Sinda fears the magic because she is unable to control it and returns to the city of Vivskari with the hope she'll be accepted into the wizard's college there.

She's turned away because she is not of noble blood nor is she able to pay tuition. Her anger rages out of control and she causes a fountain to bubble over, a show of magic that prompts a powerful but unorthodox wizard named Philanthia to take Sinda as a scribe while agreeing to teach her to control her magic. Sinda begins to work but is troubled that she is unable to quickly learn to harness the magic that Philanthia assures her is very powerful.

Meanwhile, Sinda renews her friendship with the son of an Earl, Kiernan. When she stumbles on a ritual being performed on Orianne, who has been presented as the princess Nalia, Sinda realizes that Orianne is also not the real princess. Sinda and Kiernan set out to discover the truth and find a plot that runs deep and involves a powerful wizard named Melaina and her sister who was the Oracle who gave the false prophecy. Melaina prompted her sister to give the false prophecy and prompted the king and queen to send their daughter to a convent for her own safety, putting Sinda as a stand-in for the princess until the danger had passed. Sinda then learns that Orianne is Melaina's daughter and that Melaina switched her with the real princess at birth in order to bring her own line of the royal family into power.

Sinda struggles to right the wrong that's been done, putting the true princess back on the throne. She arrives at the coronation just before Orianne is crowned and makes her accusations. When it becomes apparent that Sinda is telling the truth, Melaina tries to kill the real princess which would still clear the way for Orianne to take the throne, but Orianne steps in front of the princess, sacrificing herself.

With the rightful heir on the throne, Sinda tries to decide what to do with her life. The real princess, raised as Mika but now called Nalia, calls on Sinda to be her chief advisor and announces that Kiernan is waiting for her. Kiernan says his parents have agreed to bless his engagement to Sinda and she prepares to move forward with these new roles as her life.

More summaries and resources for teaching or studying The False Princess.