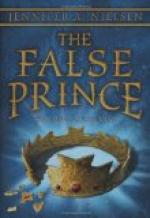 Jennifer A. Nielsen
This Study Guide consists of approximately 21 pages of chapter summaries, quotes, character analysis, themes, and more - everything you need to sharpen your knowledge of The False Prince: Book 1 of the Ascendance Trilogy.

The False Prince: Book 1 of the Ascendance Trilogy Summary & Study Guide includes comprehensive information and analysis to help you understand the book. This study guide contains the following sections:

This detailed literature summary also contains Topics for Discussion on The False Prince: Book 1 of the Ascendance Trilogy by Jennifer A. Nielsen.

"The False Prince" is a young adult novel by Jennifer Nielsen which revolves around a plot to put forth an impostor to the throne to save the kingdom of Carthya.

Sage is a fourteen year-old orphan who steals a roast from a local butcher, but is saved from his wrath by a nobleman named Bevin Conner. Conner is visiting different orphanages, and buying teenage boys who resemble the missing Prince Jaron, heir to the throne of the Kingdom of Carthya. Conner is a minor regent of the circle that surrounds the King. The King's wife and oldest son have been murdered. Conner is a patriot who wants to see the kingdom of Carthya preserved, rather than fall into civil war at the hands of Prime Regent Veldergraft. He therefore concocts the plan to place a fraud on the throne to avert the coming war. Jaron has been missing for years, and is presumed dead following a pirate attack.

Over the next two weeks, Sage and two other boys compete against each other to become Conner's choice for the imposter. By the end of the two weeks, Sage emerges as the choice, but spares the lives of his two competitors. Sage reveals that he is indeed Prince Jaron himself, stunning all those around him, including the king's court. It is further revealed that Conner is responsible for the murder of the royal family and led the pirate attack aimed at claiming the life of Sage/Jaron. Conner is arrested and Jaron assumes his rightful throne.

More summaries and resources for teaching or studying The False Prince: Book 1 of the Ascendance Trilogy.

The False Prince: Book 1 of the Ascendance Trilogy from Gale. ©2005-2006 Thomson Gale, a part of the Thomson Corporation. All rights reserved.