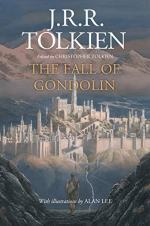 The Fall of Gondolin Setting

Valinor is the city of the Valar, Middle-earth’s gods, where the two Trees of Lights existed before Morgoth corrupted them. It was the only city to survive Morgoth’s corruption at the beginning of the world and the only place that the Eldar could go to find safety from the darkness. After the Valar banish a majority of the Noldoli from the city and lose the Trees of Light to Morgoth, the Valar close off Valinor and refuse to respond to any messengers from the outside world. Ulmo, being the only Valar willing to help the people of Middle-earth, implies that his brethren have no interest in anything outside the safety of Valinor.

The Great Sea is the Middle-earth equivalent of the ocean where Ulmo’s power is the strongest. Despite this, the Great Sea still suffers from rough waters and frequent storms because of...

The Fall of Gondolin from BookRags. (c)2022 BookRags, Inc. All rights reserved.