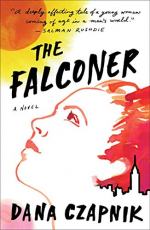 Dana Czapnik
This Study Guide consists of approximately 50 pages of chapter summaries, quotes, character analysis, themes, and more - everything you need to sharpen your knowledge of The Falconer.

The Falconer Summary & Study Guide includes comprehensive information and analysis to help you understand the book. This study guide contains the following sections:

This detailed literature summary also contains Quotes and a Free Quiz on The Falconer by Dana Czapnik.

The following version of this book was used to create this study guide: Czapnik, Dana. The Falconer. New York: Atria, 2019.

The Falconer tells the coming-of-age story of 17-year-old Lucy Adler. It is set in New York City in 1993 and begins on a public basketball court where Lucy and her best friend Percy Abney are playing a pick-up game with a group of middle-aged men. Lucy and Percy win, then play a game of one-on-one. Lucy believes she will lose, but plays anyway because she knows Percy will have to touch her throughout the game. She imagines what it might be like to be prettier, and whether that would make Percy view her as more than a friend.

Lucy goes to the Lower East Side to visit her 25-year-old cousin Violet, a painter who lives in a loft with her best friend and fellow artist Max. The three young women discuss art and feminism, and then Violet's boyfriend Shaw arrives. Max dislikes Shaw because he does not take his relationship with Violet seriously. Next, Lucy meets her friend Alexis in Central Park, where she notes a particular statue she likes called The Falconer, which depicts a young boy releasing a bird from his hand. Lucy wonders why there are no statues of girls engaged in similarly active endeavors. That night, Lucy sees Percy and he brings her a copy of her father's novel, which he found in a secondhand shop. Lucy's father is now a lawyer, and she wonders if he is disappointed that he never became a successful author. Percy claims his own father does not love him, and expresses his shame at his parents' obscene wealth.

Lucy and Percy prepare to go to a nightclub with Percy's brother Brent and his friends. Brent asks his girlfriend Kim to give Lucy a makeover, which involves caking makeup on her face and dyeing her hair. Lucy wonders aloud if makeup is a “signifier of [women's] inferiority” (99). At the club, everyone takes ecstasy, and Lucy kisses a strange man. Percy pulls her away from him, claiming he is looking at for her safety, then goes home with another girl. Shortly thereafter, Lucy plays in a basketball game at a public high school, and much to her chagrin, her team loses badly. To make matters worse, she cannot stop dwelling on her school guidance counselor's declaration that her SAT scores and lack of extra-curricular activities make it unlikely she will be accepted to the colleges to which she would like to apply. Distraught, Lucy leaves the game without telling anyone, but Percy follows her. They go back to his apartment and have sex. This is Lucy's first time, and she is hurt to discover afterwards that Percy seems to still have no romantic feelings for her. The sex meant nothing to him. Three weeks later, Lucy has not spoken to Percy. She goes to a diner with Alexis on New Year's Eve. Alexis tells Lucy about taking her mother to Rye Playland, an amusement park in upstate New York, because her mom has always wanted to go to Disney World. Lucy realizes she has never really thought about how Alexis' lower-middle class status has affected her home life.

Lucy helps Violet set up an exhibit for Max's work. They take a break to go to a bookstore, and Lucy sees Percy there, cuddling with one of her classmates, a girl named Lauren Moon. Violet buys Lucy two books by feminist existentialist Simone de Beauvoir, and rants about how her books are shelved in the Women's Studies section instead of under Philosophy. Lucy goes home and asks her mother Carol if she regrets giving up her job at Columbia University to be a stay-at-home mom, and Carol insists that she does not. Lucy wonders if she will have to make the same choice between work and her family when she is an adult.

Lucy and Alexis go to prom, but Lucy flees the scene when she sees Percy enter with Lauren Moon. She meets Violet and Max at a bar. Lucy and Violet witness Shaw kissing another girl, and go back to Violet's apartment. When Lucy leaves, she runs into Shaw on the street, and she is surprised to see that Violet lets him into her apartment. Lucy is riding home on the subway when she sees a woman jump in front of the train. In shock, she exits the subway and calls Percy, who, rather than consoling her, tells her that life and death do not matter. Lucy hangs up and vows that she will never let herself become as desperate as this woman must have been feeling.

A few months later, Lucy is playing basketball again at the park. This time, she is not thinking about the boys around her, but admiring her own athletic skills. She has gotten accepted to the University of California Berkeley, where she will be playing on the basketball team. She recalls what happened in school earlier that day. A boy had gotten hold of her yearbook and defaced her picture, writing “FEMINAZI” (250) across it. When Lauren Moon heard about this, she asked a teacher to get Lucy a new yearbook, despite the fact that the two girls are not really friends. Lucy was touched. Lauren asked Lucy why Percy had not called her recently, and Lucy made excuses for him. Back in the present, Lucy goes home after her game and finds Percy in her kitchen. He tells her he is going to Harvard and majoring in economics to please his father, who agreed to help a friend of Percy's with his legal trouble. He also says he stopped calling Lauren because he saw no future in their relationship. Lucy realizes she feels nothing for Percy any longer, and that she has become her own individual, independent person after the events of the last year.

More summaries and resources for teaching or studying The Falconer.

The Falconer from BookRags. (c)2022 BookRags, Inc. All rights reserved.