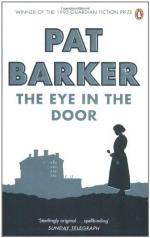 The Eye in the Door Summary & Study Guide

Pat Barker
This Study Guide consists of approximately 38 pages of chapter summaries, quotes, character analysis, themes, and more - everything you need to sharpen your knowledge of The Eye in the Door.

The Eye in the Door Summary & Study Guide Description

The Eye in the Door Summary & Study Guide includes comprehensive information and analysis to help you understand the book. This study guide contains the following sections:

This detailed literature summary also contains Topics for Discussion on The Eye in the Door by Pat Barker.

The Eye in the Door is a story of fragmentation and the dualities that exist in the minds and lives of its characters. Much of the novel takes place in London during World War I from 1914 to 1918. The infamous Pemberton Billing trial provides a backdrop and several historical figures of the time play key roles in the fictional narrative. The horrors of mechanized war, rigid class divisions, and sexual ambiguity comprise the thematic foundation of this novel.

Billy Prior, the main protagonist, is an only child from a violent, working class home in northern England. He earned an officer's commission and fought in the muddy trenches at the Front until he was wounded. The physical injury heals, but Prior is severely traumatized by his combat experience. Billy Prior, like many of the characters in the novel, is haunted by his recollections of the war. One particularly disturbing memory entails the dislodged eyeball of Towers, one of Billy's comrades. After a stay at Craiglockhart War Hospital in Edinburgh, Billy returns to London where he works for the domestic Intelligence Unit of the Ministry of Munitions.

When the novel begins, Billy Prior is already a divided self. He is neither for nor against the war. He neither loves nor hates his parents. Billy straddles the line between pacifism and a commitment to war as well as between loyalty to his friends and loyalty to his profession. He also struggles between heterosexuality and bisexuality and between darkness and light. The state of suspended ambiguity in which Billy Prior lives only becomes uncomfortable when its validity is challenged by external events. Billy is a patient of Dr. William Rivers, a renown social anthropologist and psychiatrist who treats men suffering from shell-shock and war-related nervous disorders.

One evening, Billy has a casual encounter with Charles Manning, another of Dr. Rivers' patients and a fellow officer. Manning is a closeted homosexual who leads a double life. Manning, too, has been deeply affected by the war. Physically, Manning is forever altered. Emotionally, he is in tatters. When Manning receives an invitation to a play from an anonymous source, his fear of exposure leads Manning to the desperate brink of obsession.

Things take a turn for the worse, however, when Billy Prior begins to lose time. The Eye in the Door is a novel of epiphany, deep reflection and ultimately, reclamation. Dr. Rivers and his patients explore the layers and textures of what it means to be a whole, integrated person.

Billy Prior, Charles Manning, and Dr. Rivers' other patients stand as witnesses while they break down, break apart, and are finally reunited with themselves.

More summaries and resources for teaching or studying The Eye in the Door.

The Eye in the Door from BookRags. (c)2022 BookRags, Inc. All rights reserved.