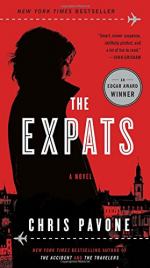 Chris Pavone
This Study Guide consists of approximately 66 pages of chapter summaries, quotes, character analysis, themes, and more - everything you need to sharpen your knowledge of The Expats.

The Expats: A Novel Summary & Study Guide includes comprehensive information and analysis to help you understand the book. This study guide contains the following sections:

This detailed literature summary also contains Quotes and a Free Quiz on The Expats: A Novel by Chris Pavone.

NOTE: This guide refers to the paperback copy of The Expats, written by Chris Pavone and published by Broadway Books, New York, USA, 2012.

Kate gives up her secret career as a CIA agent to follow her husband's new job to Luxembourg. The mundane daily duties of being a stay-at-home mom bring frustration and boredom, but Kate quickly finds herself investigating two new friends and her own husband when she becomes suspicious of their actions. Kate learns that the friends are FBI agents using fake names as their cover to investigate her husband for a large international cyber theft crime.

A CIA field agent provided Kate with the FBI agents' real names. Over a year later, Kate realizes she has heard the woman's name before. She drags out her husband's college yearbook and learns that the woman was a friend of his during their freshman year in college. Linking the two together as far back as twenty years ago provides a twist to the story and connects the woman to the cyber crime as well.

Kate, with the help of a CIA supervisor, makes arrangements to capture confessions for the cyber crime in exchange for immunity for her husband. In a surprising ending, Kate lets the corrupt FBI agents escape capture, but she keeps the stolen money for a new CIA operation in Europe. She also makes arrangements to go back to work for the CIA in a position that allows her to balance her family life.

More summaries and resources for teaching or studying The Expats: A Novel.

The Expats: A Novel from BookRags. (c)2022 BookRags, Inc. All rights reserved.