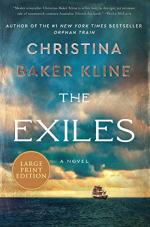 Related Topics
Orphan Train
A Piece of the World: A Novel

Christina Baker Kline
This Study Guide consists of approximately 64 pages of chapter summaries, quotes, character analysis, themes, and more - everything you need to sharpen your knowledge of The Exiles.

Flinders Island is where the Palawa were relocated after the British forced them from their ancestral land on Lutruwita, or Van Demien’s Land. They lived on the “remote point” of Flinders called Wybalenna (1). Mathinna was born on Flinders and exposed to both British and Palawa culture from a young age. Although Mathinna had only ever known Flinders, her mother detested it, claiming that they had been forced to a land that was not healthy for them. The Palawa’s health continues to decline over time. Mathinna later admits that she would have died like the others had she stayed on Flinders Island. On the contrary, she is taken from Flinders and her tribe at eight years old to live with Lady Franklin at her request.

Newgate Prison is where Evangeline is held after her arrest for larceny and attempted murder. The prison...

More summaries and resources for teaching or studying The Exiles.

The Exiles from BookRags. (c)2022 BookRags, Inc. All rights reserved.