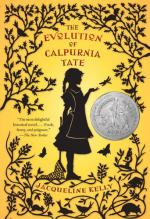 Jacqueline Kelly
This Study Guide consists of approximately 35 pages of chapter summaries, quotes, character analysis, themes, and more - everything you need to sharpen your knowledge of The Evolution of Calpurnia Tate.

The Evolution of Calpurnia Tate Summary & Study Guide includes comprehensive information and analysis to help you understand the book. This study guide contains the following sections:

This detailed literature summary also contains Topics for Discussion on The Evolution of Calpurnia Tate by Jacqueline Kelly.

The Evolution of Calpurnia Tate, by Jacqueline Kelly, is a novel set at the turn of the 20th century. The story follows six months in the life of young Calpurnia Tate, a smart, funny 11-year-old girl who is evolving along with the century as she tries to focus on exploring science and the natural world with her grandfather rather than learning the domestic arts her mother thinks she will need in her inevitable role as a wife and mother.

Calpurnia Virginia Tate — known as Callie or Callie Vee to her family — lives in a small Texas farming town with her parents, six brothers and grandfather. Although her grandfather is an imposing, somewhat scary figure, Callie forges a close relationship with him when she begins to share his interest in nature and science. Granddaddy takes her under his wing and teaches her about the scientific method and the importance of recording her observations, which she does in a special notebook bought for her by her oldest brother, Harry.

As the summer progresses, Callie and her grandfather make frequent trips to the San Marcos River, which runs through their farm, to look for specimens. On one such trip, they collect a sample of a vetch plant, and upon returning to his library to research it, Granddaddy begins to believe they might have discovered a new species. Together they get the plant photographed and send their evidence to the Smithsonian for verification.

As they wait for word about their discovery, Callie's mother begins forcing her to spend less time on science and more learning the domestic arts such as cooking and sewing, which she finds incredibly boring. However, her mother is insistent because she sees no possible future for her only daughter other than becoming a traditional wife and mother. Callie goes along as best she can, but continues to feel that she is different from other girls and hopes to have a different, wider future.

Several months after sending their letter, Callie and her grandfather receive word from the Smithsonian that they have indeed discovered a new species, which they can name after themselves as is customary. This finally captures the attention and admiration of the rest of the family, and Callie summons the nerve to reveal her hope of attending college and seeing the world rather than settling down to an early marriage.

Throughout the book, Charles Darwin's The Origin of the Species is woven into the plot, drawing parallels between Darwin's discoveries and Callie's own personal evolution. Callie and her family also experience several new inventions, including Coca Cola, the telephone and the automobile, all of which are embraced by her grandfather, who passes on to Callie his excitement at the prospects of the new century.

More summaries and resources for teaching or studying The Evolution of Calpurnia Tate.

The Evolution of Calpurnia Tate from BookRags. (c)2022 BookRags, Inc. All rights reserved.