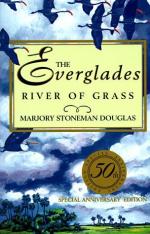 The Everglades: River of Grass Summary & Study Guide includes comprehensive information and analysis to help you understand the book. This study guide contains the following sections:

This detailed literature summary also contains Topics for Discussion and a Free Quiz on The Everglades: River of Grass by Marjory Stoneman Douglas.

The Everglades is a grassy wetlands area in southern Florida. It begins south of Lake Okeechobee and extends the rest of the length of Florida. It has its own finely balances ecosystem and supports a variety of animal and plant life. It plays an important role in the ecosystem of all of southern Florida and, therefore, effects the economic viability of the area.

Douglas discusses the structure and history of the Everglades and how it came to be inhabited by Indians. There were various tribes that settled in different parts of Florida and they adapted their ways to their environment. They arrived around 900 AD. As European navigation aids improved, the white man began to arrive. The Indians resisted any attempts to imprison them and maintained their freedom. They knew how to survive in the swamplands. As the explorers arrived, they interacted with the Indians. Many whites who were shipwrecked were taken captive.

The explorers dealt with the great Chief Carlos. Carlos was interested in maintaining peace with the white man but also in protecting the freedom of the Indians. For over three hundred years, the Indians thwarted the attempts of the white man to take control of Florida. When the continent began to be settled by the whites, the Indians were pushed further into the Everglades. There were frequent wars, especially once the government tried to relocate the Indians to the west.

As Florida became more settled, the Everglades became a sanctuary for escaped slaves who banded with the Indians. This remained a source of conflict until the end of the Civil War.

As Florida became more settled, the Everglades were confronted with the issues of modernization. There were attempts to drain the Everglades. As agriculture developed, the agricultural and industrial wastes were dumped into the Everglades which began to ruin the delicate balance of the ecosystem. Attempts at water management and flood control led to the entry of salt water which caused further damage to the ecosystem. This eventually led to efforts to protect the Everglades and to try to repair some of the damage that had taken place. The author, Marjory Stoneman Douglas, has been very active in these efforts.