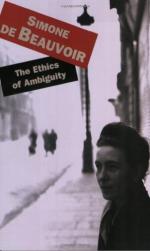 Simone De Beauvoir
This Study Guide consists of approximately 23 pages of chapter summaries, quotes, character analysis, themes, and more - everything you need to sharpen your knowledge of The Ethics of Ambiguity;.

The Ethics of Ambiguity; Summary & Study Guide includes comprehensive information and analysis to help you understand the book. This study guide contains the following sections:

This detailed literature summary also contains Topics for Discussion and a Free Quiz on The Ethics of Ambiguity; by Simone De Beauvoir.

Simone De Beauvoir (1908-1986) is a mid-20th century French existentialist and feminist philosopher, a prolific member of a group that includes Jean-Paul Sartre and Albert Camus. The Ethics of Ambiguity is her attempt to lay out an existentialist ethic. Her work consistently emphasizes the importance of freedom and responsibility and of recognizing the true ambiguities of life. Her book, The Second Sex, is one of the founding documents of modern feminism.

The Ethics of Ambiguity follows on the heels of Beauvoir's previous essay Pyrrhus et Cineas. Beauvoir believes that our existence is radically contingent, in that human beings may well not have existed in their present form. Further, there exists no essence of standard of value that exists apart from human beings. She also maintains the existentialist idea that the individual can only be free when others are free. The work is begun when Beauvoir notes that human beings live in a tragic situation. Humans experience their freedom as a drive to becoming more than they presently are despite the overwhelming resistance of the world. Human existence is ambiguous in that it mixes an internal desire to move beyond the world while feeling out of control. To live an ethical life, this ambiguity must be faced.

Many human beings deny this paradoxical being but these individuals are doomed to unhappiness and tyranny. We cannot set up our ends and goals as absolutes and we must also not rely on an external source of value. We act ethically when we accept the magnitude of our choices. Genuine human freedom comes through seeing one's self as the author of all values. Philosophies like those of Kant, Hegel and Marx build human value and meaning on the universal when instead it belongs in the concrete. The existentialist roots human value in the individual but strives to avoid selfish individualism.

Beauvoir's most illuminating argument for her thesis is her description of the development of man and the order of human beings who face the ambiguity of existence. Children cannot be moral but as they grow up they adopt differing attitudes that affect their morality. The first of these people is the "sub-man" who abandons spontaneity and denies his freedom. The "serious man" can recruit him into immorality and bad action. The serious man rests life in an external standard. The free man must resist the attitude of seriousness. Next comes the "nihilist" who is disappointed by seriousness and despairs as a result. The next man is that "adventurer" who is close to authentic morality but is one who cares only for her freedom and projects and thus becomes selfish and potentially tyrannical. The last man is truly free.

While Sartre believed that men could transcend any situation, Beauvoir notes that often times humans set up barriers that really destroy the freedom of others. This is oppression, like the oppression of women and children under patriarchy who adopt false goals for themselves because they know nothing else. We must revolt to free them and to free ourselves.

The Ethics of Ambiguity; from BookRags. (c)2022 BookRags, Inc. All rights reserved.