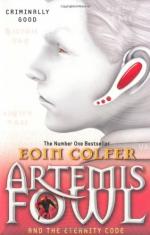 Eoin Colfer
This Study Guide consists of approximately 51 pages of chapter summaries, quotes, character analysis, themes, and more - everything you need to sharpen your knowledge of The Eternity Code.

Fowl Manor in Ireland is Artemis's ancestral home. This is where Holly takes Butler to recuperate when she uses healing magic to save his life after Blunt shoots him. Jon Spiro also sends Mulch and Loafers to Fowl Manor to kidnap Artemis, and at the end of the novel, this is where the mind wipes take place.

En Fin is the restaurant in Knightsbridge, London where Artemis arranges a business meeting with Jon Spiro which ends with Blunt shooting Butler.

The C Cube is a miniature computer that reads any data, whether it is electronic or organic. Artemis created it using fairy technology, but when he offers to keep it off the market for a year for a sum, Jon Spiro steals it. Since it can scan the Lower Elements because it was created with fairy technology, Holly, Mulch and Foaly help...

More summaries and resources for teaching or studying The Eternity Code.