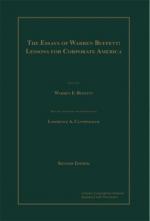 Warren Buffett
This Study Guide consists of approximately 30 pages of chapter summaries, quotes, character analysis, themes, and more - everything you need to sharpen your knowledge of The Essays of Warren Buffett.

The Essays of Warren Buffett: Lessons for Corporate America Summary & Study Guide includes comprehensive information and analysis to help you understand the book. This study guide contains the following sections:

This detailed literature summary also contains Topics for Discussion and a Free Quiz on The Essays of Warren Buffett: Lessons for Corporate America by Warren Buffett.

The Essays of Warren Buffett: Lessons for Corporate America, published in 1997, is compiled by Lawrence A. Cunningham from the Essays of Warren Buffett. The editor prepares this collection of Buffett essays as the core of a symposium and standard text for his course in business practices. The original conference is attended by Warren Buffett and Charlie Munger, the Chairman and Vice-Chairman respectively of Berkshire Hathaway Inc., which is a $70 billion enterprise based on the investment principles of Ben Graham. This work is the non-fiction story of Berkshire Hathaway and significant steps along its development to the multi-billion dollar global holding company it is today.

Berkshire Hathaway begins in the early 1800s as a textile plant. Warren Buffett and Charlie Munger develop the company by the late 1990s as a holding company that owns insurance and other leading business interests, although not textiles. The $70 billion enterprise they control includes GEICO and General Re Corporation, two of the largest US and world insurance companies, many manufacturing and distribution companies in consumer products and services, candy, ice cream, training, general aviation, and electric and gas power generating fractional interests. Substantial equity interest is owned in American Express, Coca-Cola, Gillette, and Wells Fargo.

Cunningham selects and compiles Warren Buffett's writings that illustrate his modest, self-effacing gracious and considerate manner as a successful billion-dollar manager. Together with his partner Charlie Munger they build Berkshire from humble roots as a textile company to the $70 billion dollar holding company in Omaha, Nebraska, Buffett's hometown. Berkshire today donates almost $200 million to four thousand charities. Buffett is generous to his operating managers, making sure that Berkshire pays them enough for their performance to be active investors in the companies. In over sixty-three years of profitable investing, Buffett disproves many Wall Street investment theories and high-flying fads.

The highly structured format and appearance belies the delightful reading content. A formal layout presents a well-defined roadmap of a Buffet theory of business acquisition and development. The Table of Contents lists subjects covered, such as "Corporate Finance and Investing" and "Accounting and Valuation." Chapter subsection titles add a touch of humor, like "Cigar Butts and the Institutional Imperative" and "Aesop and Inefficient Bush Theory." The challenging content of Buffett's essays is easy to read. Difficult ideas appear Zen-like in simple form. Their understanding comes like a flash in a memorable verbal wrapper. Buffett's homespun quips are delightful to read and their quiet wisdom shows in the many anecdotes he shares.

More summaries and resources for teaching or studying The Essays of Warren Buffett: Lessons for Corporate America.