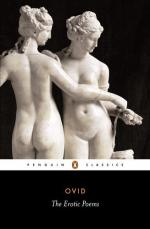 This work is a set of books by a Roman poet. Ovid was a prestigious man from a high class family, but not from the first class. The citizens had been divided into classes according to a schematic centuries earlier. The author came from a family of equestrians, which was a respectable middle class position.

The author grew up in Rome when it had an empire and still in a strong and growing position. The expansions of the city had simply continued from the time of its first foundations and did not cease until times when the city and/or empire was fended off and pushed back. This was typically a sign of having over-extended itself. As such, Ovid was justifiably proud to be a Roman at the height of her glory.

The culture of the time was entering into a reaction to excessive liberality. The...