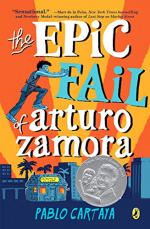 Pablo Cartaya
This Study Guide consists of approximately 36 pages of chapter summaries, quotes, character analysis, themes, and more - everything you need to sharpen your knowledge of The Epic Fail of Arturo Zamora.

This detailed literature summary also contains Quotes and a Free Quiz on The Epic Fail of Arturo Zamora by Pablo Cartaya.

The following edition of this book was used to create this study guide: Cartaya, Pablo. The Epic Fail Of Arturo Zamora. Puffin Books, 2017. Paperback.

It is the summer between seventh and eighth grade for Arturo Zamora, who lives in the Miami suburb of Canal Grove. The Zamoras have a close-knit extended family, many members of which work together at their local Cuban restaurant, La Cocina de la Isla, and also live together in different units of the same apartment building. The family is led by Arturo’s mother, Cari, the head chef of the restaurant, and also the widow Abuela, who used to run the restaurant but now kindly chats with the many regular customers. Arturo is stunned to see that Carmen and her father, Frank, have arrived in Canal Grove for the summer from Spain: Carmen’s mother had recently passed away, who was one of Cari’s closest friends. Arturo had previously played with Carmen when they were younger kids, but now is startled to find that he is attracted to her.

The Zamora family had plans to expand their restaurant, but the plans seem to be put on hold as the real estate developer Wilfrido Pipo plans to build a large development called Pipo Place on their property. Carmen wants to investigate Pipo, and sees that he is convincing other members of the community by distributing free gifts from his elaborate real estate office. The Zamora family begins to frequently argue with one another about the best way to proceed to save the restaurant from Pipo. They realize it will come down to a city council vote in a few weeks.

Abuela gives Arturo a cigar box full of letters written by his deceased Abuelo. Arturo privately reads the letters, which describe how Abuelo summoned the courage to pursue Abuela when he was a taxi cab driver in their native Cuba. Arturo learns from Abuela, Abuelo, and also Carmen about the poetry of José Martí, a Cuban poet who was a pivotal historical figure in the liberation of Cuba. Abuela’s health begins to decline as she stays home from the restaurant entirely.

Pipo throws a large block party, intended to further convince the members of the community about his project. He gets into an argument with Arturo’s older cousins, Vanessa, who is distributing fliers in protest of the development. Arturo tells Carmen that he likes her, in response to which Carmen nervously backs away from him. As Pipo begins to make a speech at his block party, Arturo begins to shout and interrupt him, arguing with Pipo over the value of family. Arturo is carried away by Pipo’s private security guards. When Arturo’s Aunt Tuti comes to fetch him from Pipo’s private offices, she tells him that Abuela is in the hospital. Later that night, Cari tells him that Abuela has passed away.

After holding a private funeral service, the family begins to prepare a special feast in the restaurant, inviting pivotal members of the community. Cari rejects Pipo’s attempt to be invited to the dinner. Cari invites Arturo to cook alongside her in preparation for the dinner, the first time she has allowed him to be with her in the kitchen.

The day after the successful feast, the Zamora family dresses up to go to the pivotal city council meeting. On their way to city hall, they notice that Pipo has a bulldozer next to the restaurant, as if he is immediately prepared to knock it over. At the meeting, Pipo boldly and brashly presents his plan for Pipo Place, and then rudely interrupts Cari as she presents her own vision to maintain the restaurant. During a break in the meeting, Carmen and Arturo find themselves in a private corridor of the building, and Carmen kisses Arturo, saying she had been too nervous to react when he had previously said he liked her. This gives Arturo the confidence to speak during the next portion of the meeting, open to the public, and he shares aloud a poem he had written in memory of Abuela. The next day, the city council passes a law that buildings cannot be above a certain height in Canal Grove, effectively preventing Pipo Place from being built, and Pipo quickly leaves town.

More summaries and resources for teaching or studying The Epic Fail of Arturo Zamora.