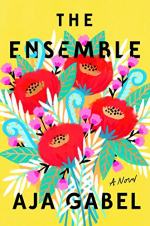 The Ensemble Summary & Study Guide includes comprehensive information and analysis to help you understand the book. This study guide contains the following sections:

This detailed literature summary also contains Quotes and a Free Quiz on The Ensemble by Aja Gabel.

The following version of this book was used to create this study guide: Gabel, Aja. The Ensemble. New York, Riverhead Books, 2018. Hardcover.

In May 1994, the Van Ness quartet—first violinist Jana, second violinist Brit, violist Henry, and cellist Daniel—plays their graduating recital. Jana sleeps with their coach, Fodorio, because he will be a judge at the upcoming Esterhazy competition. Afterward, she goes to Henry’s apartment, where they often sleep together platonically. Henry reveals that Fodorio offered him a solo career, but Henry refused. Meanwhile, Brit is heartbroken over the end of her secret relationship with Daniel, though she knows he is uninterested in commitment. Since the deaths of her parents, Brit has longed for a fairy-tale love, but Daniel wants everything to be rational.

The quartet flies to Canada for the Esterhazy. Daniel and Brit eat dinner together and she admits that if not for the quartet, she would take a risk on their relationship; he insists they would not be together anyway. During the concert, all four players are so disconnected that they cannot make the music click. They do not move on in the competition. They all get drunk in Jana’s hotel room, and through the sloppiness they forge a decision to move to New York as an ensemble.

In August 1998, the Van Ness is the Quartet-in-Residence at Juilliard. Henry’s student and lover, Kimiko, reveals she is pregnant. He realizes he loves her and they decide to have the baby, though it will require sacrifices. That week, Jana spends the night for one last time, and Henry confesses Kimiko’s pregnancy, knowing his sibling relationship with Jana will have to change to accommodate his new family. Meanwhile, Daniel and Lindsay have been married for just under a year, but they have stopped saying “I love you.” Daniel had hoped their marriage would offer him a relationship without obligations, but neither he nor Lindsay is satisfied. When Daniel leaves, he temporarily moves in with Henry and Kimiko.

The quartet returns for a second shot at the Esterhazy competition, but Henry has secrets: a growing pain in his bow arm, and an upcoming meeting with Fodorio. Daniel and Henry go for a drink at the hotel bar, but the tension between them only rises. Finally, Henry goads Daniel into punching him, which gives them both the emotional release and mutual forgiveness they need.

The next day, Daniel invites Brit for a walk and she turns him down. He feels aimless and lonely, so he goes to Henry’s hotel room, where he finds Henry speaking with Fodorio about his career options. In the wings before the concert, Daniel and Jana reflect on the unfairness of Henry’s being the only one with family in attendance; at least Brit’s parents are dead rather than uncaring. Daniel turns to see Brit’s stricken face, and as the quartet begins their concert he feels desperate to make it right. Their performance is falling apart again when they are interrupted by a medical emergency in the audience. When they begin the piece again, Brit mouths “love you,” releasing Daniel from her expectations. All four quartet members, even the vacillating Henry, acknowledge in the music that they are family.

After the concert, Henry learns it was his sister who collapsed. Daniel rushes him to the hospital, where they learn she will be fine. Henry confirms he will stay with the quartet, and Daniel returns to the hotel to reconnect with Brit. She interrupts their conversation to phone her boyfriend, Paul, but Daniel will always remember the night not for the competition win but for lying next to her in bed and letting himself care.

In March 2003, Jana returns to Los Angeles for her estranged mother’s funeral. Catherine was always self-centered, but Jana was resigned to it by the end. Catherine’s boyfriend, Carl, asks Jana to play something at the funeral, but announces the wrong piece: Barber’s Adagio for Strings, which is not meant to be played alone. At the reception afterward, Jana thanks Brit for coming to support her and confides that she is adopting a baby from Ethiopia.

Brit takes Paul, her boyfriend of ten years, to the Allbrights’ 2007 Fourth of July Party. Brit is no longer satisfied in the relationship, which she had expected to end when the quartet moved from LA to the Bay Area. At the party, the quartet plays Tchaikovsky’s famous Andante cantabile to thank their patrons. Brit and Daniel escort Henry and Kimiko’s daughter, Clara, to the bathroom because she feels sick. On the edge of the bathtub, they find the photo from their graduation recital. As Clara vomits in the toilet, Brit and Daniel kiss.

One evening, Brit and Paul babysit Henry and Kimiko’s children and Jana’s daughter. Brit builds a fort with them, since Paul is annoyed by the chaos and noise. When she steps away for some space, she hears shouting and finds that little Jack has broken one of Paul’s prized model ships. She tries to calm Paul down, but he calls her selfish, like all musicians. Clara diverts attention by announcing that she saw Daniel and Brit kiss. That night, Paul gives Brit a speech that he will get over it, but he will never talk to Daniel again and Brit must respect the things Paul likes.

In 2007, the quartet premieres a commissioned piece by Julia St. John. Henry’s doctor has told him he must stop playing so much or lose his ability to play entirely; he has not told the quartet yet. Henry loves Kimiko, but he takes out his frustration on her and others around him. He fixates on the question of whether he has changed. At the premiere, Julia introduces her piece and praises the quartet for dedicating their lives to their art and finding “in that art, a kind of love that grows like corn” (268). Henry realizes how grateful he is for all his families, including the quartet and Kimiko and his children. During the performance, his bow arm gives out and he makes his first public mistake. Instead of fighting the pain, he accepts that it will soon be Kimiko’s turn.

During the festival, Kimiko privately admits she has allowed her relationship with Henry and their children to sacrifice her chance at a musical career. Jana, the only person she can talk to about her conflicted feelings, counsels her to remember that both she and Henry are artists in love with other artists. As Kimiko watches Henry falter onstage, she acknowledges that she has changed and feels released to make her own choices.

In the summer of 2009, Kimiko confesses her needs to Henry, and he agrees to retire at the end of the season so she can take her turn. Clara mistakenly reveals the plan to the quartet during a photoshoot. Though they, particularly Daniel, react with anger, Henry knows they will find a replacement and the quartet will go on. The next spring, they will play Mendelssohn’s Octet with the up-and-coming Seoul Quartet, then their final concert with Henry, at Carnegie Hall.

During the months after Brit and Paul’s breakup, Daniel was a good friend to Brit. Finally, they went on a trip to New York together and Daniel admitted his feelings. Now they have been together for almost two years and remain deeply in love. His mother is dying of cancer, so he and Brit decide to get married in his parent’s backyard before the Carnegie performance. Jana will give Brit away, and Henry will officiate. Henry gifts Daniel a record of the Budapest String Quartet performing Tchaikovsky’s Andante cantabile to play at the wedding, and the two men embrace. Henry’s wedding speech focuses on the mystery of love and the importance of connection. Daniel admits that much is beyond his control and lets himself feel the love of the moment.

In December 1992, we the quartet play together for the first time. We find each other in every way, even if it will take a long time to get it right. We are stuck together, but we do the sticking: “We found each other” (335).