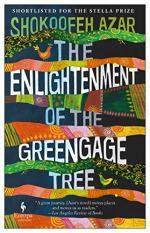 Shokoofeh Azar
This Study Guide consists of approximately 53 pages of chapter summaries, quotes, character analysis, themes, and more - everything you need to sharpen your knowledge of The Enlightenment of the Greengage Tree.

In Chapter 13, Beeta returns to Razan, now much older. While in Tehran, Beeta enrolled in university as an art history student, but was later arrested at a student protest and temporarily thrown into prison.

Back in Razan, Beeta becomes obsessed with fairytales and spends most of her time daydreaming. One night, Beeta dreams of making love to Issa and awakes to find herself pregnant. Rather than a human child, Beeta gives birth to a fish. This continues until the house is full of fish.

Eventually, Beeta’s legs turn into a fish tail, so Hushang builds a pool for her to live in. Now spending most of their time reading together, Beeta, Hushang, and Bahar grow closer than ever. As Beeta’s body continues to transform, Hushang prepares to move her to the ocean.

Bahar and Hushang visit Beeta at the shore every...

More summaries and resources for teaching or studying The Enlightenment of the Greengage Tree.

The Enlightenment of the Greengage Tree from BookRags. (c)2022 BookRags, Inc. All rights reserved.