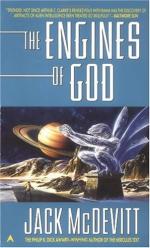 Jack McDevitt
This Study Guide consists of approximately 55 pages of chapter summaries, quotes, character analysis, themes, and more - everything you need to sharpen your knowledge of The Engines of God.

The Engines of God Summary & Study Guide includes comprehensive information and analysis to help you understand the book. This study guide contains the following sections:

This detailed literature summary also contains Topics for Discussion and a Free Quiz on The Engines of God by Jack McDevitt.

The Engines Of God by Jack McDevitt is a novel of exploration and interstellar archaeology. The story begins with the anticipated terraforming of a planet called Quraqua called Project Hope. It is the hope of those on Earth that this will be a new start. It is the year 2197 and archaeologists are trying to uncover the meaning behind the monuments they have found and those who created them. Quraqua is deserted now, but archaeologists have uncovered ruins that may hold the key to the Monument Makers. They scramble to uncover the last of the ruins before the terraforming project begins and covers them permanently. By 2202, archaeologists uncover the Temple of the Winds on Quraqua. They discover a link between the ruins here and a figure discovered on Iapetus. Vying for time, they struggle to finish and lose archaeologist Richard Wald in the process.

When the evacuation is complete, the team returns to earth but it is difficult to set aside the mystery of the Monument Makers. They need to understand why entire civilizations are disappearing, leaving charred buildings in their wake. Priscilla Hutchins gets a message meant for Richard and discovers a link between Quraqua and the planet Nok. Interruptions in civilizations on both planets appear to have happened with a regularity. She shares her thoughts with other team members and a Quraquan translation telling them to search for the Monument Makers by the light of the horgon's eye gives them yet another clue. They set off for Beta Pacifica in search of answers, but find more than they bargained for. Their ship is damaged and dead in the water, with help almost two weeks away. Survival is tenuous but Hutch uses imaginative and creative solutions to the ongoing issues which included lack of power and heat. Rescue comes and the investigation continues. Beta Pacifica III yields unpleasant surprises. Although they find ruins again, much like they did on Quraqua, there are also residual life forms on this planet. Their shuttle pilot is overcome by crab-like creatures when he leaves the shuttle to investigate what appears to be an altar and soon afterwards, the same creatures use intelligent military strategy to isolate and kill two more team members. In all, three team members are killed. The remaining three transfer to a second rescue vessel called the Ashley Tee and find their way to yet another system where they hope that they can attract the Monument Makers. Anomalies in the sky appear and curiosity has them plotting a course to intercept while four people remain on a Delta moon creating a monument of their own. The anomaly is attracted by their creation and it almost results in the death of them, but an understanding is finally reached. Will Earth be the next target?

More summaries and resources for teaching or studying The Engines of God.

The Engines of God from BookRags. (c)2022 BookRags, Inc. All rights reserved.