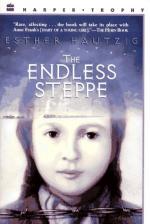 The Endless Steppe; Growing Up in Siberia Summary & Study Guide

Esther Hautzig
This Study Guide consists of approximately 31 pages of chapter summaries, quotes, character analysis, themes, and more - everything you need to sharpen your knowledge of The Endless Steppe; Growing Up in Siberia.

The Endless Steppe; Growing Up in Siberia Summary & Study Guide includes comprehensive information and analysis to help you understand the book. This study guide contains the following sections:

This detailed literature summary also contains Topics for Discussion and a Free Quiz on The Endless Steppe; Growing Up in Siberia by Esther Hautzig.

The Endless Steppe is the story of a young girl named Esther Rudomin and her family who are exiled to Siberia from Poland at the start of World War II. They are a prominent Jewish family and it is determined that they are Capitalists and must be exiled for punishment to Siberia in order to learn the lesson of hard work and labor. Although Esther's troubles in Siberia are immense, she comes to realize that in the end, her fate was far luckier than many other members of her family who will killed in concentration camps during the war.

Esther is nine when her family consisting of her mother, father and paternal grandmother are taken by the Russian soldiers and put on a cattle train. For three weeks, they travel slowly, boxed in with many other families in very tight, inhospitable conditions. When they finally arrive, they are shocked to find themselves in Siberia with many other prisoners who were deemed capitalists and threats to society. They are immediately assigned to work in various places. Esther's mother is in charge the dynamite used in the gypsum mine with other women, while her father drives a horse and cart. Esther accompanies the rest of the children in weeding around the potatoes in order to ensure a better harvest so they do not starve that winter.

The work is long and hard and the family joins the rest of the exiles in a large, converted schoolhouse where they sleep together. After weeks of hard labor, they are given the option to move into town towards a village in order to prepare for the winter and its harsh environment. Initially, they live in some barracks, but find private housing with another couple. They will live in a variety of different housing huts with other inhabitants during their years in Siberia, even having their own hut for a short period of time. Esther grows up in the village of Rubtsovsk, becoming a mixture of Polish deportee and Siberian girl by the time she leaves at age 13. She will attend school here and develop a strong love of Russian literature. She will learn how to work hard as a knitter and learn creative ways to help her family, especially after her father is sent to the front lines of the war.

Esther, her mother, and grandmother are eventually allowed to return to Poland. They meet Samuel in Lodz and their new life out of exile will finally begin. However,they suffer a great loss as they learn their entire family has been killed during World War II in the concentration camps. They cannot return to their beloved Vilna and must try to etch out a new life in Lodz.

More summaries and resources for teaching or studying The Endless Steppe; Growing Up in Siberia.

The Endless Steppe; Growing Up in Siberia from BookRags. (c)2022 BookRags, Inc. All rights reserved.