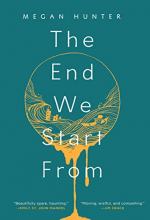 The End We Start From Summary & Study Guide

Megan Hunter
This Study Guide consists of approximately 36 pages of chapter summaries, quotes, character analysis, themes, and more - everything you need to sharpen your knowledge of The End We Start From.

The End We Start From Summary & Study Guide Description

The End We Start From Summary & Study Guide includes comprehensive information and analysis to help you understand the book. This study guide contains the following sections:

This detailed literature summary also contains Quotes and a Free Quiz on The End We Start From by Megan Hunter.

The following version of this book was used to create this study guide: Hunter, Megan. The End We Start From. Picador, 2017. Kindle AZW file.

The End We Start from follows the story of an unnamed narrator who gives birth to her first child as a severe natural disaster hits the United Kingdom and forces the narrator and her partner R to flee their home.

The novel begins with the narrator going into labor and contacting her partner, known only as R, to inform him what is happening because he is away climbing a mountain. R contacts a friend who, along with another friend, join the narrator as she awaits the return of R. However, the narrator’s labor progresses too quickly for R to arrive in time and the friends take the narrator to the hospital where she gives birth. R comes back to the city and meets the narrator in hospital minutes after she has given birth to their son, whom they name Z. While the narrator is recovering in the hospital, she receives news that London has been evacuated as a result of unprecedented flooding. R picks her and Z up from the hospital and takes them to stay with his parents, G and N, who live in a mountainous region.

At G and N’s house, R begins to build a cabin in the garden for them to live in. R, G, and N participate in regular supply runs during which the narrator stays at home with Z. One day R,G, and N do not return at the expected time. R and N return without R’s mother G, who has been killed during a mass panic in a crowded area. R stops building the cabin in the garden and the narrator attempts to carry on building it herself while also taking care of baby Z. The sounds of the hammer upset the baby and so the narrator stops building the cabin as well. The narrator finds herself taking over the role of G in the household, performing domestic tasks such as cooking and cleaning, while R and N become depressed and uncommunicative due to their grief over the death of G.

Later, R and N go on another supply run. The narrator waits at home with Z not knowing if or when they will return. She watches television talent shows with Z and carefully avoids watching any news broadcasts in order to avoid thinking about the reality of the outside world. Eventually, R returns without N, who has also been killed. He tells the narrator they have to leave immediately. The narrator leaves the house in a panic with the baby and belatedly realizes that she has neglected to pack Z’s diapers. She looks into the trunk of the car and sees that R has stocked it with all the supplies they need, including diapers.

The narrator, R, and baby Z flee England across the border into Scotland. They live in their car until Z becomes unwell. They take him to a hospital. At the hospital, R faints at the sight of a crowded area due to the traumatic experiences he suffered in crowds when his mother and father were killed. Initially, the doctors believe that R is the emergency before the narrator explains that it is the baby who needs treatment. She is relieved to discover that the doctors still consider the life of a baby to be worth saving. After Z is discharged, the family returns to living in the car but the narrator is unhappy with the arrangement. The narrator refuses to carry on living in the car and insists they find a refugee camp. R pulls over at the next camp. The narrator and Z settle into the camp but R is terrified of living in close proximity to others and insists on leaving to spend some time alone, promising to come back in a week.

The narrator joins a mother and baby group in the camp and begins to find a network of support to help her raise Z. The narrator befriends another mother, O, with a baby the same age as Z, named C. They become close friends and support each other with the practical parts of childrearing. They are informed that they must leave the camp before R has returned. They stay briefly at another refugee camp where the facilities are much more rudimentary than they are used to. The narrator worries that they have now travelled too far for R to be able to find them. O tells the narrator that she has a plan and convinces her to leave the camp with the help of two men, D and L, who have a car. They are stopped by checkpoint guards who force the narrator and O to undress. They continue travelling to meet a friend of O’s, named H, who has a boat.

Along with his own wife and children, H sails the narrator, O, Z, and C to a remote island off the coast of Scotland. Much to the surprise of the narrator and O, D and L do not wish to come with them to the island, so they part ways on the beach. On the island, the characters live in an old building, grow their own food, and get safe clean water from a well. They listen to news about the mainland on the radio. The narrator starts running on the island in order to improve her fitness which has weakened since the birth of the baby. When things on the mainland seem to have improved, the narrator insists on returning with Z in search of R. H sails the narrator back to the mainland. The narrator has feelings for H but chooses to resist them in order to stay faithful to R.

On the mainland, the narrator and H meet the same guards who forced the narrator and O to undress, but this time the guards behave professionally. The narrator and Z travel back to the narrator’s home city of London where she begins to search for R. She is told that she will be able to return to her old apartment because the flood waters have now subsided. The narrator bumps into an old work colleague and discovers that they no longer have anything in common. The narrator locates R in a hospital and the three of them return to their apartment. Z takes his first step.

More summaries and resources for teaching or studying The End We Start From.

The End We Start From from BookRags. (c)2022 BookRags, Inc. All rights reserved.