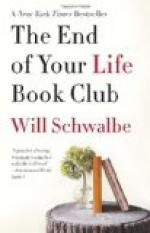 Plot Summary
+Chapter Summaries
Crossing to Safety-Seventy Verses of Emptiness
Majorie Morningstar-Daily Strength For Daily Needs
People of the Book-The Uncommon Reader
The Lizard Cage-Continental Drift
The Painted Veil-Wherever You Go, There You Are
Kokoro-The Reluctant Fundamentalist
The Year of Magical Thinking-Girls Like Us
Suite-Francoise-The Elegance of the Hedgehog
The Girl With The Dragon Tattoo-My Father's Tears
Too Much Happiness-Epilogue
Characters
Objects/Places
Themes
Style
Quotes
Topics for Discussion
Order our The End of Your Life Book Club Study Guide

The End of Your Life Book Club Summary & Study Guide

Will Schwalbe
This Study Guide consists of approximately 30 pages of chapter summaries, quotes, character analysis, themes, and more - everything you need to sharpen your knowledge of The End of Your Life Book Club.

The End of Your Life Book Club Summary & Study Guide includes comprehensive information and analysis to help you understand the book. This study guide contains the following sections:

This detailed literature summary also contains Topics for Discussion on The End of Your Life Book Club by Will Schwalbe.

The End of Your Life Book Club by writer and publisher Will Schwalbe, is a novel about the author's mother, exploring her relationship with books and her commitment to changing the world for the better. Mary Ann, Will's mother, is diagnosed with pancreatic cancer in her early seventies. The entire family is made aware of her illness, and it begins to change the way they interact with one another in subtle and positive ways. Always close to one another, Will and his mother begin a book club, in which they exchange and discuss books with one another frequently. Though this practice is actually something they have done with one another throughout their lives, Mary Ann's illness and approaching death causes them to seek out books that can teach them more about life and the struggles which they face on a regular basis. Even though Mary Ann is dying, she is far from giving up on her countless humanitarian causes, most notably a traveling library she hopes to install in Afghanistan before she passes. This remarkable narrative covers Mary Ann's history and her activity in the civil rights movement, as well as her charity work and powerful faith, which only grows stronger as her illness grows. In turn, the author details the lessons he learns from his mother over the years, and continually supports his mother's idea that books are more than just stories, they are powerful agents for change across the world.

Mary Ann confronts her sickness with strength, but her humble nature refuses to allow her to consider herself brave, as she has spent enough time in the third world to know that despite her sickness she is very fortunate. In fact, it is stories of bravery and courage from the third world that continues to support her and give her strength, and she manages to survive and remain relatively healthy for a very long time in comparison to others diagnosed with her same form of pancreatic cancer. Mary Ann manages to survive over two years with a disease that typically kills people within six months of its diagnosis, and she lives surrounded by friends and family who care deeply about her. She shares her love of books with everyone around her, including her grandchildren, and passes on with the knowledge that she had more time with them than many could every hope for. Will realizes that despite the grief he feels when she dies, he will be able to share his mother's favorite books with her grandchildren, and he continues to draw strength from the memories of his mother and the books they shared together.

More summaries and resources for teaching or studying The End of Your Life Book Club.

The End of Your Life Book Club from Gale. ©2005-2006 Thomson Gale, a part of the Thomson Corporation. All rights reserved.