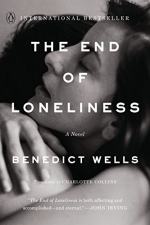 Charlotte Collins and Benedict Wells
This Study Guide consists of approximately 66 pages of chapter summaries, quotes, character analysis, themes, and more - everything you need to sharpen your knowledge of The End of Loneliness.

The End of Loneliness Summary & Study Guide includes comprehensive information and analysis to help you understand the book. This study guide contains the following sections:

This detailed literature summary also contains Quotes and a Free Quiz on The End of Loneliness by Charlotte Collins and Benedict Wells.

This guide was written with the following version of this book: Wells, Benedict. The End of Loneliness. New York: Penguin Books, 2019.

Seven years old, Jules Moreau is part of a happy family in Munich with his older siblings Liz and Marty, alongside their parents. Their father, of French origin, is soft-spoken while their mother is charming and the life of the family, known for her wide friendships. Jules' early childhood memories are marked by time spent in their father's ancestral home and paternal grandmother in Berdillac, France. Jules' time there is marked by quiet adventures with the family in the countryside, including traumatic memories of a dog drowning in a river. Three years later, Jules' father has become withdrawn and drifted away from his children. Jules and his siblings see their father crying after a camera of his is broken. Growing up and becoming confident, Jules begins to dismiss his father, as his life is consumed with girls, his social life, and learning to cook with his mother. That New Years, the parents decide to go on a trip, visiting Berdillac while gone, and die in a road accident. The children are put under the guardianship of their mother's elder sister and admitted into a boarding school.

At the boarding school, Jules becomes withdrawn, losing his social composure and becoming emotionally distant from his siblings. Alone for the most part, Jules develops a close friendship with the enigmatic Alva, with whom he feels a connection based on their sadness, along with harboring intimate feelings for her. Despite their distance, the siblings always come together on the Christmas break, becoming comfortable in an evocation of holidays spent with their parents. However, when Jules was 14, Marty and Liz get into an argument regarding the latter's promiscuity and drug abuse. Already facing a host of disciplinary issues at school, Liz is pushed to the edge by Marty's attack, and a few weeks later, leaves the school without telling anyone. Jules is then 19 and ready to graduate from school, unclear about his future. Marty is in Vienna, while Liz is in London at the time. Alva and Jules are close friends, but Jules notices her emotional strain and the intimacy she avoids in life. He has developed feelings for her but is unsure if he should confess, particularly as Alva is hesitant about moving into an apartment in Berlin with him. When Jules goes to pick up Alva for a planned dinner, he finds her in bed with another man, and leaves in anger. From then, his relationship with Alva is strained and they drift apart.

After dropping out of his law studies, Jules begins a career a photography but does not find any success. Liz becomes engaged to a man seemingly incompatible with her. After a few months, the fiance leaves her and Liz has a nervous breakdown after getting an abortion. Marty begins a serious relationship with Elena after meeting her during graduate studies, all the while becoming successful from a shrewd anticipation of the internet's arrival. The three siblings, along with Elena, go to visit their grandmother's house in Berdillac that Marty has bought and renovated. Though strained, the three agreed to take LSD as a means of connecting. During the experience, Jules is able to connect with his subconscious and realize that he took up photography out of guilt over not reconciling with his father. Some time after that, Jules gives up photography and begins work as a legal adviser and scout for a record label. Liz begins school herself, training to become a teacher and the two siblings live close to each other in Berlin, while Marty and Elena are in Munich.

Marty and Elena get married while Toni, Marty and Jules' best friend from school, moves back to Munich, still harboring feelings for Liz. It is revealed that Elena cannot have children, while Liz contemplates the possibility of a child again. On a whim, Jules reaches out to Alva after turning 30. Some weeks later, she responds and they agree to meet. They are at first awkward but are able to connect with one another again. Alva talks about her time in Russia and her marriage in Switzerland. She gives Jules a gift but he does not open it after feeling stunned at her wedding and losing any hope for her. A couple years on, Jules is in a serious relationship with Nora, a former coworker. He finally opens the present from Alva, discovering it to be a signed book by A.N Romanov, their favorite author from their school years and now Alva's husband. They invite Jules to their home in Lucerne and he visits, taking time off work. While there, Jules begins to write again in Alexander's presence, while also regaining his intimacy with Alva. Jules and Alva begin to notice the slow deterioration of Alexander's mind due to Alzheimer's and the strain it puts on them. Despite a warning from Alexander, Jules and Alva become physically intimate, prompting Alexander to become belligerent. One day Jules finds Alexander in the basement, ready to commit suicide with the same weapon his father did years ago. Though he has forgotten his plan, Jules reminds him, encouraging him to let go and leaves the house while Alexander does it.

After the funeral, Jules and Alva get married, supported by the considerable estate Alexander left behind. Alva returns to school while Jules begins work as an editor, having worked on Alexander's final incomplete manuscript. In a final letter, Alexander, knowing that Jules was sleeping with Alva, had requested that Jules include his two stories in the final manuscript as a trade of sorts. Jules and Alva settle into married life in Munich, close to both Marty and Elena. Marty is a professor who engages intellectually with Alva while Elena is a psychotherapist, a calm presence that all benefit from. Alva becomes pregnant with twins, and Jules finally begins to feel content in his life in a way he has not since before his parent's death. Vincent and Luisa are born, and both grow into different temperaments. Luisa goes after Liz, vivacious and exuberant, while Vincent goes of after Jules, more withdrawn and grim than his sister. Meanwhile Liz and Toni go back and forth in their relationship, with Liz appreciating his attention but unwilling to commit to him.

Jules' idyllic life is thrown into a wrench when Alva is diagnosed with leukemia. While Jules struggles emotionally, Alva remains resolute, enduring her chemotherapy with courage despite the pain she is in. Jules struggles to deal with the children without Alva, who spends long weeks in the hospital. When Alva is at home, she and Jules try to spend as much time as possible with one another. Eventually, Alva recovers and their life goes back on track. They visit Berdillac, spending time with Marty and Elena, along with Toni and Liz. However, just as it seems that things are recovering, Alva's cancer rears its head, this time terminal. Jules is more distraught this time, developing insomnia and withdrawing emotionally from the world. Marty and Elena move in to help with the kids, though Jules still remains in a fog. Alva is mostly in a drug-induced stupor but spends time with Jules and the kids when she can. Right before Alva passes away, Liz, unsatisfied with her life, moves to India without any contact with anyone. After Alva's passing, Jules goes out on a motorcycle ride, trying to commit suicide but straightening himself in time. He ends up in the hospital where everyone questions if he is suicidal. As a result, Jules misses Alva's funeral. He continues to struggle emotionally, but seeing his children, tries to become better. As time goes on, Jules gradually begins to settle into his new life, moving the kids and himself to Marty's house. On a trip to Berdillac with the family, Jules bonds with the increasingly withdrawn Vincent while crossing the same trunk on a river he did as a child. Later, as he sees his family jubilantly playing, Jules steps out to join them, ready to live his life with them.

More summaries and resources for teaching or studying The End of Loneliness.

The End of Loneliness from BookRags. (c)2022 BookRags, Inc. All rights reserved.