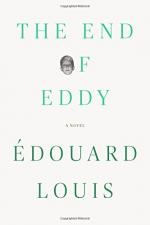 Édouard Louis and Michael Lucey
This Study Guide consists of approximately 38 pages of chapter summaries, quotes, character analysis, themes, and more - everything you need to sharpen your knowledge of The End of Eddy.

The End of Eddy Summary & Study Guide includes comprehensive information and analysis to help you understand the book. This study guide contains the following sections:

This detailed literature summary also contains Quotes and a Free Quiz on The End of Eddy by Édouard Louis and Michael Lucey.

The following version of this book was used to create this study guide: Louis, Édouard. Translated by Michael Lucey. The End of Eddy. Farrar, Straus and Gireaux, 2017.

In the autobiographical novel, The End of Eddy, author Édouard Louis explores the experience of growing up gay in a rural, poor village in northern France. The novel is split into two Books, Book I: Picardy (Late 1990s to Early 2000s) and Book II: Failure and Flight. Book I opens with a chapter titled, "An Encounter," in which the protagonist Eddy is being beaten up by two bullies. He is frequently called names like "faggot" and "gayboy" at school. "My Father" gives a brief overview of Eddy's father's life, dwelling especially on the abuse and violence that Eddy's father witnessed at home.

"Mannerisms" describes Eddy's parents' dislike of their son's mannerisms, which his father calls his "fancy ways" (15). The chapter "At School" describes the school where Eddy attends, which is nine miles from the village. "Pain" returns to the scene at the beginning of the novel. Eddy's two bullies are leaving and Eddy feels hurt to know that they will not think about him again.

In "A Man's Role," Eddy reflects on the links that many villagers make between masculinity and violence. He details the violent histories of many of his family members, who have either beaten or been beaten up. Eddy recalls one day when his older brother beat his dad up. Eddy's father refused to hit back because he had once promised himself never to be like his father. In "Portrait of My Mother," Eddy describes his mother, her frustration and anger at the limitations and hardships she has faced. In “Portrait of My Mother From the Stories She Told,” Eddy recounts a story his mother once told him, about a miscarriage she once suffered. In “My Parents’ Bedroom,” Eddy recalls his father's anger and frustration at his son, who liked to sleep with them in their bed at night.

“The Lives of Girls, Mothers, Grandmothers” reveals several anecdotes about Eddy's sister, mother, and grandmother. His sister was convinced to change her career goals from Spanish teacher to salesclerk. His mother found herself trapped in the home, and his grandmother unwisely bought a house she could not pay for, where she lives cold and alone. In “Village Stories,” Eddy recalls the time a villager died in his home and his corpse began to smell throughout the town.

In “A Good Education," Eddy begins to notice the differences between his family and the other families around him. Some families are wealthier and more intellectual than his, while other families live only off unemployment benefits from the government. “My Other Father” includes two stories about Eddy's father told to him by his mother: first, that Eddy's father once stopped a group of men from beating up an openly gay man at a party; and second, that Eddy's father once quit his factory job and went traveling with a Maghrebi man.

In “On Why Men Don’t Trust Doctors," Eddy thinks about himself, his father and his uncle, all of whom dislike and distrust doctors. Eddy's uncle was actually paralyzed from an alcohol-induced coma after rejecting the advice of medical professions. In "Sylvain (An Eyewitness Account," Eddy recalls his troublesome, "tough guy" cousin Sylvain, who eventually died in prison after refusing treatment for his advanced lung cancer. Eddy's family remembers Sylvain fondly and admires him.

In the chapter, "The Shed," Eddy and his friends, inspired by a pornographic film they watched, begin playing a game in which two of the boys penetrate the other two. Eddy's mother walks in on them in the shed, and Eddy's father slaps him hard. In "After the Shed," news of the incident spreads and Eddy is mocked and humiliated. In "Becoming," Eddy resolves to become a "tough guy" (143) according to the standards of his village. He decides to be more interested in sports and to date girls.

In "Laura," Eddy dates a girl named Laura, though he finds kissing her repulsive. In "The Body's Rebellion," Eddy encounters a strong man at a concert and later masturbates to him. In "A Final Attempt at Love: Sabrina," Eddy tries dating a different girl named Sabrina but when they are pressured to have sex in the chapter, "Disgust," Eddy breaks up with her.

Book II: Failure and Flight begins with a chapter titled "A First Attempt at Flight." Here, Eddy tries to run away from home; his father catches him and brings him back. In "Strait is the Gate," Eddy auditions for a spot at a theatre-based high school in the city of Amiens. When he is accepted into the school, Eddy is overjoyed at finally being able to leave the village. In the Epilogue, Eddy is at school, happy to be away from home but struggling to adjust to his new surroundings and to make friends. The novel ends with Eddy throwing away a jacket his family gave him and laughing along with a group of students when they call him gay.

More summaries and resources for teaching or studying The End of Eddy.

The End of Eddy from BookRags. (c)2022 BookRags, Inc. All rights reserved.