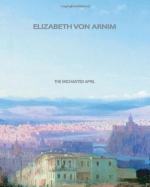 Elizabeth von Arnim
This Study Guide consists of approximately 41 pages of chapter summaries, quotes, character analysis, themes, and more - everything you need to sharpen your knowledge of The Enchanted April.

This detailed literature summary also contains Topics for Discussion and a Free Quiz on The Enchanted April by Elizabeth von Arnim.

This novel, first published in the early 1920's, tells the story of four British women who spend a month in the Italian countryside, experiencing a range of personal and emotional transformations. As it explores its central theme of awakening to a more fulfilled life, the narrative also explores themes relating to the inevitability of love, the presence and value of nature, and the relationship between past, present, and future.

When the narrative begins, acquaintances Mrs. Wilkins and Mrs. Arbuthnot find themselves drawn together by an intriguing newspaper advertisement offering an Italian villa for rent the following April. The impulsive Mrs. Wilkins recognizes in the more restrained Mrs. Arbuthnot, a sense of unhappiness with life that she too feels and suggests that they rent the villa together in the hopes of reawakening their joy in life. Mrs. Arbuthnot eventually agrees, taking responsibility for making the arrangements with the villa's owner, Mr. Briggs, who upon meeting her, finds her very attractive. When the two women discover the cost of the rental, which they consider to be high, they decide to invite others to join them and reduce expenses even further. After receiving only two responses, they find they have no choice but to invite the aristocratic Lady Caroline Denston and the imperious Mrs. Fisher to the villa.

When Mrs. Wilkins and Mrs. Arbuthnot arrive in Italy, they are dismayed to discover that both Lady Caroline and Mrs. Fisher arrived before them and have taken the best rooms for themselves. Mrs. Wilkins, however, quickly gets over her dismay as she almost immediately falls in love with the Italian landscape. Mrs. Arbuthnot, meanwhile, who had not even told her husband she was going away, feels increasingly guilty about what she is done. For their parts, Lady Caroline indulges in a rare opportunity for reflection and self-examination and Mrs. Fisher stays very much to herself.

Over the course of their vacation, each of the women experiences awakenings of feeling and insight. The sensitive and intuitive Mrs. Wilkins finds so much joy and freedom in being away from her life that she wants to share it with her husband, an ambitious lawyer, and invites him to join her. Lady Caroline comes to realize that much of her life is shallow and cheap, but also realizes that she does not really know how to transform it. Mrs. Fisher feels stirrings of a new and youthful desire to engage in the world and in life, while Mrs. Arbuthnot decides to ease her guilt by following the example of Mrs. Wilkins and inviting her husband to join her.

When Mr. Wilkins arrives, he behaves with genuine affection towards his wife, grateful for the opportunity he sees her as having given him specifically, the opportunity to court both the friendship and the potential business of Lady Caroline and Mrs. Fisher. Lady Caroline, accustomed to the flattering attentions of men, dismisses him and continues to keep to herself. Mrs. Fisher, however, finds herself drawn to him and enjoying his company, while Mrs. Wilkins rejoices in her husband's attention. Meanwhile, Mr. Briggs stops by for a visit on his way to Rome, paying flattering attention to Mrs. Fisher, but forgetting his attraction to Mrs. Arbuthnot the minute he sees the beautiful Lady Caroline, who initially sees him as the sort of pesky attention seeker she came to Italy to avoid, but eventually finds him attractive.

Potential for tension and confrontation suddenly appears in the form of one of Lady Caroline's English suitors who, narration indicates, is in fact Mrs. Arbuthnot's husband. Before tension can develop, however, the affection of Mrs. Arbuthnot, who believes her husband has come to see HER, triggers a surge of similar affection in her husband. Lady Caroline, meanwhile, acts as though she has never met him in her life and turns her affections back to Briggs.

As the novel concludes, all four women are portrayed as emerging from their "enchanted April" renewed in life, love, and spirit.

More summaries and resources for teaching or studying The Enchanted April.