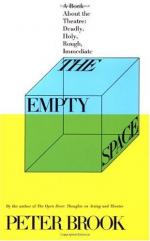 Peter Brook
This Study Guide consists of approximately 26 pages of chapter summaries, quotes, character analysis, themes, and more - everything you need to sharpen your knowledge of The Empty Space.

This detailed literature summary also contains Topics for Discussion and a Free Quiz on The Empty Space by Peter Brook.

The Empty Space is composed of a series of lectures on the subject of theatre written and delivered by noted British director and producer Peter Brook in the late 1960s. The lectures explore the nature and purpose of the theatre, examine aspects of contemporary theatre production and philosophy that prevent the theatre from fulfilling its purpose most effectively, and discuss ways in which theatre might (must?) change in order for that purpose to be fully realized. Central to the author's thematic point is the contention that the fundamental reason theater exists is to awaken in an audience an understanding of the human condition they were previously unable, or unwilling, to apprehend.

Each lecture in the book examines an aspect and/or a manifestation of theatre's core function and intent, as well as ways in which contemporary theatre creation prevents both from being fully realized. At the beginning of the first lecture, on "The Deadly Theatre", the author offers an explanation of the concept of "the empty space"—it is, in his view, a term for any venue in which theatre takes place. As illustration, he offers experiences of having seen theatre in plush London commercial venues, Broadway, renovated churches, bombed out ballrooms in Germany, and even people's living rooms. Theatre, he suggests, takes place in any "empty space" where one (or more) individual(s) watches other individual(s) recreate life with the intent of illuminating its meaning—or at least an aspect of its meaning. He then presents several theories about how and why theatre, in whatever "empty space" it's presented, either succeeds or fails in fulfilling that intent.

The first essay examines in depth the nature of what the author defines as "The Deadly Theatre", or theatre that is essentially dull and un-engaging. This sort of theatre, he suggests, is defined by passivity—of creators, of interpreters (actors, directors), and of audiences. Nothing happens on stage to fully and challengingly engage an audience; therefore, an audience is not engaged at all. The second essay examines "The Holy Theatre", or theatre which, in the author's perspective, is more concerned with spiritual, higher values that ultimately are removed from an audience's day-to-day experience, and are therefore un-engaging.

The third essay, "The Rough Theatre", explores techniques that the author suggests could be employed by both "The Deadly Theatre" and "The Holy Theatre" to awaken audiences to theater's potential power and insight. These techniques, he suggests, are based in spontaneity, impulse, and raw emotional expression. There is a danger, he suggests, in relying too much on "the rough theatre", with too much emphasis on its values leading to a lack of depth, shallow meaning, and theatre of sensation rather than insight. For insight to be gained, he writes, the best aspects of "the rough theatre" must be combined with the best of "the holy theatre", with such a combination offering the possibility of enlightenment through an examination of incidents of sensation grounded in episodes from daily life. This combination, he maintains, was and is most ideally expressed in the works of William Shakespeare. He offers several examples of how Shakespeare achieved this alchemy, and of how that alchemy has proved transcendently effective over the centuries since the plays were first written.

This alchemy, or rather what the author sees as alchemy, is further defined in the final essay of the book, "The Immediate Theatre". This, in the author's perspective, is theatre that combines the rough and the holy in an experience that brings illumination of human truth and experience to an audience in an immediate, visceral, sometimes sub-conscious but always revelatory way. This essay explores several techniques potentially employable by theatre practitioners of all disciplines (creators, actors, directors and critics) in order to make theatre both personally and societally relevant. Application of these techniques, he concludes, will also serve both theatre and society in terms of keeping theater evolving—for as life changes, so does the experience of, and the potential for connecting with, deeper human truth as portrayed (by practitioners) and experienced (by audiences).

More summaries and resources for teaching or studying The Empty Space.