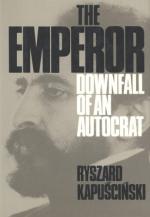 The Emperor: Downfall of an Autocrat Summary & Study Guide

Ryszard Kapuściński
This Study Guide consists of approximately 25 pages of chapter summaries, quotes, character analysis, themes, and more - everything you need to sharpen your knowledge of The Emperor.

The Emperor: Downfall of an Autocrat Summary & Study Guide Description

The Emperor: Downfall of an Autocrat Summary & Study Guide includes comprehensive information and analysis to help you understand the book. This study guide contains the following sections:

This detailed literature summary also contains Topics for Discussion and a Free Quiz on The Emperor: Downfall of an Autocrat by Ryszard Kapuściński.

Emperor Haile Selassie ruled Ethiopia from 1930 to 1974. While his regime was dedicated to the improvement of Ethiopia and making economic progress to end or alleviate the suffering of the poor, corruption permeated through it, up to even the highest levels. When international attention was turned to the fact that nobles and dignitaries were living lives of luxury while hundreds of thousands were dying of disease and starvation, a revolution began in the country, ending ultimately in the Emperor's deposition.

The Emperor's reign was concerned with, above all, ensuring that he stayed in power. Every morning he was briefed with intelligence reports about any conspiracies or dissidents in the Empire. Positions were handed out based not on merit or ability, but rather on how the person filling the position would make the Emperor look. Thus, he often purposefully chose unskilled and incompetent people to fill important roles. That way, when a poor decision was made, even one that came ultimately from him, he could blame the minister. Likewise, people would never make the mistake of thinking that anything good in Ethiopia did not come from him. The only positive quality he valued in a potential appointee was loyalty.

A person, no matter how stupid, could have almost any job if the Emperor felt he could trust him. On the other hand, if the Emperor ever had reason to doubt someone's loyalty, they would be quickly removed from their positions and perhaps even punished. Loyalty usually did not come free, however, and the Emperor realized this. He kept his subjects loyal by making them totally dependent upon him. He raised up his ministers and advisers from torrid poverty to lifestyles they could never have imagined, and they remained conscious forever that he could just as easily take that away from them.

The Emperor's trust would be shaken when a man named Germame Neway led a revolt against the government. Neway had already disappointed the Emperor by disobeying the corrupt system of tribute which enriched the country's dignitaries. What was worse, however, was that Neway actually gave away land and money to the peasants. This could make the Emperor look bad and cause peasants elsewhere to demand the same thing. Therefore, Neway was shipped away to a remote province filled with nomads; there, he could not redistribute land. While there, Neway began hatching a secret conspiracy which involved some of the Emperor's most trusted dignitaries. The conspiracy went into action when the Emperor was out of town and the rebels managed to seize control of half of the military. The revolt failed, and order was restored in Ethiopia—for the time. After that point, an air of uncertainty lingered around the Imperial Palace.

Matters were made worse for the Emperor when a British journalist produced a documentary which showed both the corruption and miserable poverty of Ethiopia. Not only did this spark international outrage, it also caused a desire for reform and change in Ethiopia. Everyone had always been poor, and everyone always knew the government was corrupt, but now they wanted to change it. Mutinies began to break out in the provinces and the military began to fall gradually into revolt. The revolution reached the Palace and the rebels began to arrest and imprison various officials they believed guilty of crimes. The Emperor, for his part, did very little to stop it. He was possibly in his nineties at this point—his age was somewhat of a mystery—and either felt like he could do nothing to stop the revolution or was simply too old to fight it. The rebels superficially maintain allegiance to the Emperor, an appearance which the Emperor tacitly corroborated with his inaction. The rebels did eventually dethrone the Emperor in 1974 and seize control. He died one year later of heart failure.

More summaries and resources for teaching or studying The Emperor: Downfall of an Autocrat.

The Emperor: Downfall of an Autocrat from BookRags. (c)2022 BookRags, Inc. All rights reserved.