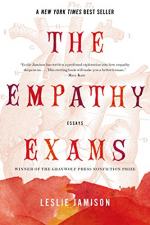 Leslie Jamison
This Study Guide consists of approximately 45 pages of chapter summaries, quotes, character analysis, themes, and more - everything you need to sharpen your knowledge of The Empathy Exams.

The following version of the book was used to create this study guide: Jamison, Leslie. The Empathy Exams: Essays. Minneapolis: Graywolf Press, 2014.

The first essay in this book, also titled "The Empathy Exams," begins with Leslie's work as a medical actor. She contrasts her experiences pretending to be a patient for medical students to practice diagnoses and bedside manner to her real-life medical experiences. She writes about a two-month period in her life in which she had two medical procedures: an abortion and heart surgery. In "Devil's Bait," she writes about Morgellon's disease, an illness that the medical community does not believe exists. Leslie attends a conference for those who suffer from it and explores the questions of phantom illness and very real pain. In "La Frontera," Leslie goes to Mexico for a literary gathering. Her experiences there help her to better understand the issues of violence in the country largely created by the narco wars and help to dispel some American preconceptions about life south of the border.

In "Morphology of the Hit," Leslie is living and working in Nicaragua when she is assaulted and robbed when walking alone. She struggles to write about this incident and uses archetypal folkloric structures to help order her narrative. The essay "Pain Tours (I)" is divided into three short sections. In the first section, Leslie visits the silver mines of Potosi and witnesses the terrible working conditions there first hand. In "Sublime, Revised," she writes about the reality television show 'Intervention' and how it provides a portal into the pain of addicts for its viewers. In the final section of "Pain Tours (I)," Leslie goes on a Gang Tour in which tourists are taken through disenfranchised areas of Los Angeles in a form of poverty tourism.

The next essay, "The Immortal Horizon," is about an 'ultrarunning' event called the Barkley Marathon which is notoriously brutal and which less than ten people have ever completed. Leslie attends as a support system for her brother who is running the race for the first time. The essay, "In Defense of Saccharin(e)" is an exploration of the moral and aesthetic value of sentimentality. Leslie uses artificial sweeteners as a metaphor for sentimentality in art, literature, and life.

In "Fog Count," Leslie visits her friend Charlie in prison. They first became friends as pen pals after she met him briefly at the Barkley Marathon and later learned about his subsequent incarceration for mortgage fraud. Charlie maintains his innocence and Leslie writes about what it might mean to have one's freedom virtually completely restricted. "Pain Tours (II)" is also divided into three sections; each one explores the work of a particular artist her writer. The first is about Frida Khalo and the many bodily injuries and illnesses she suffered. The second is about Joan Didion's writing on civil war in El Salvador, and the third is about the work of James Agee.

In "Lost Boys," Leslie writes about a well-publicized group of murders that was also the subject of a documentary film series. In the early 1990s, three teenage boys were convicted of murdering three younger boys as part of a Satanic ritual. After nearly twenty years in prison, the accused entered an Alford plea and were released. Leslie writes about the multiple perspectives on this crime including the points of view of the victim's parents, the accused, and herself as an outside viewer of the documentaries. The final essay, "Grand Unified Theory of Female Pain," is about how female pain is both glamorized and dismissed in art, popular culture, and life. Leslie explores many examples of female pain in everything from literature and film to personal experience to question how we can discuss female pain more honestly and effectively.

More summaries and resources for teaching or studying The Empathy Exams: Essays.