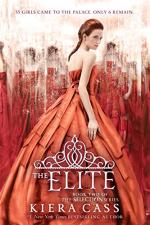 Cass, Kiera
This Study Guide consists of approximately 60 pages of chapter summaries, quotes, character analysis, themes, and more - everything you need to sharpen your knowledge of The Elite.

The Elite (The Selection) Summary & Study Guide includes comprehensive information and analysis to help you understand the book. This study guide contains the following sections:

This detailed literature summary also contains Quotes and a Free Quiz on The Elite (The Selection) by Cass, Kiera.

The following version of this book was used to create this study guide: Cass, Kiera. The Elite. Harper Collins, 2013. Kindle Edition

As the second installment of the Selection series begins – told from the first-person perspective of America Singer – America, who is now one of six girls remaining in the Selection, is on a date with Prince Maxon in the garden. Their conversation leads to Halloween and they are curious about what it is and why it is no longer celebrated. To find the answer, he takes her to a secret room which is full of books. They do some research and discover the origins of Halloween and he suggests that they have a Halloween party. He says that he has to meet the parents of the girls anyway and this would be a good opportunity to do so. Also, he knows that it is something that will make America happy especially because her little sister, May, will enjoy it.

All of the girls’ families come to the Halloween party. During the party, Maxon talks to America's father. He also tells America that she is the one for him, and they both agree that they could have a life together. However, things change when, the next day, America's friend, Marlee, and the man she loves are caned. They were caught together and this is seen as an act of treason as Marlee was one of the candidates remaining in the Selection and the man she loves is one of the royal guards. Normally, they would have been killed, but Maxon intervenes and spares their lives. In addition to the caning, they are moved down to the eighth caste, the lowest caste level. No one warns America about what is going to happen and when she sees the act, she tries to get Maxon to stop it. The guards carry her away and take her to her room.

America receives mixed reactions due to her actions. The queen tells her that she should not have done what she did, but she is glad that she did it. Aspen and her father are proud of her. All of this makes her doubt, even more, whether or not she can become a princess as she says that she could never stand by and have something like that done to someone. The discussion with the girls leads to a fight with Celeste, the girl in the Selection that America dislikes the most. All of these things take America to the bottom in terms of the public’s opinion as to who should become the next princess.

During this period of time, America has also been seeing her ex-boyfriend, Aspen, who is now a guard in the castle. So, in addition to her doubts about being able to become a princess and her doubts about Maxon’s character, she faces the option of staying with Aspen.

The girls are often giving tests that include debates. During one of their debates, Celeste says that the number of men drafted for the war effort needs to be increased. America, however, suggests that there be a voluntary draft. Kriss, another contestant, suggests that it be open to women as she has seen that women can have a killer instinct. The next test involves the girls working together to plan and host a reception for two delegations that are coming to Illea. One is German and the other is Italian. Celeste and two other girls work on a team to plan the German reception. America and Kriss are put together, but they are at a disadvantage as there are only two of them. However, they are given an extra day to plan.

Working with Kriss is hard for America because, due to America's actions, Maxon has started looking for alternatives and he sees Kriss as his backup if America decides that she does not want to be his wife. During the planning, the rebels attack. First the Southern rebels come and then the Northern rebels come to steal books. During the Northern rebel attack, America flees into the forest. She hides in a tree, but one of the girls sees her. She curtsies to America. The guards find America and she tells them that she outran the rebels. She later tells Aspen what really happened. The girls perform their duties for their respective receptions, and they all pass. During America's reception, she finds that the Italians are her allies.

During the midst of all of this America, is still going back-and-forth about how she feels about Maxon. He rises in her esteem when she finds out that he has been keeping Marlee and her now husband hidden in the castle. He has jobs for them as well. Marlee defends Maxon and tells America that she needs to watch out or else she will lose him.

By the time the next test comes, however, America has been ignored during a session when the king and queen are supposed to talk to the girls to get to know them better, she has seen Maxon with both Kriss and Celeste and she knows that the man she thought was a hero, Gregory Illea is a monster instead. All of this makes her decide that she does not need to be there. As a result, she sabotages herself by talking about Gregory’s diary and suggesting that the caste system be eliminated. This enrages the king and she knows that now, she is out of the Selection. As she prepares to leave there is another rebel attack and she and Maxon end up hiding together. He is in pain and in an effort to help him, she has to take off his shirt. Then she sees the welts on his back that his father inflicts on him when he does not behave in a manner that his father deems to be appropriate. She realizes now that she has made a mistake and has blown her chances of having the life that she really wants with Maxon. He also realizes that miscommunication has taken place which has driven her to her actions. When they have to leave their hiding place, she tells Aspen what happened and he starts making plans about writing her and then them getting married. She tells him though that she has to choose him. When she is about to leave, Maxon tells her that he has talked to his father and she has a second chance, but now she has to watch out because his father will try to get her eliminated and she has to earn his, Maxon’s, trust. She goes back to see her maids who thought she was leaving and tells them that she is now in the competition again. As the narrative ends, Anne, one of her maids, says that they need a plan.

More summaries and resources for teaching or studying The Elite (The Selection).

The Elite (The Selection) from BookRags. (c)2022 BookRags, Inc. All rights reserved.