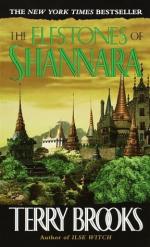 Terry Brooks
This Study Guide consists of approximately 39 pages of chapter summaries, quotes, character analysis, themes, and more - everything you need to sharpen your knowledge of The Elfstones of Shannara.

The Elfstones of Shannara Summary & Study Guide includes comprehensive information and analysis to help you understand the book. This study guide contains the following sections:

This detailed literature summary also contains Topics for Discussion and a Free Quiz on The Elfstones of Shannara by Terry Brooks.

The Elfstones of Shannara by Terry Brooks is the story of an Elven people which have long been protected from banished Demons by an enchanted tree called the Ellcrys. The Ellcrys is dying and chooses the one that must carry the seed to the Bloodfire that the Ellcrys might be reborn. Demons are already escaping from the Ellcrys boundaries in her weakened state and begin killing all those that would reinstate the Ellcrys. Those chosen must work together and learn to believe in themselves in order to save their lands from the Demon hordes.

The Ellcrys, the enchanted tree that keeps the Demons banished from earth, is beginning to die. The tree is able to communicate what must be done in order to restore the boundaries and stop the Demons from killing all human races and entrusts her seed to the Elven King's granddaughter, Amberle. Amberle does not believe she has it within herself to take on this task but is left with little choice as the Demons are already looking for her and killing others. A Druid named Allanon mysteriously shows up and picks the one who will be Amberle's protector on the journey. The protector is a young man named Wil Ohmsford. Wil has an ancient Elven magic called the Elfstones. Wil is not sure that he can even use them but finds himself willing to take on the task of protecting the girl.

As these two begin their journey there are Demons that have been able to break through the boundaries as the Ellcrys dies. One of the Demons, the Reaper, is after Wil and Amberle as the other Demons are in battle with the Elven armies. Time is running short as Wil and Amberle begin the journey with the Ellcrys seed to Safehold. Along the way they are helped by a band of Rovers and one of them, a beautiful woman named Eretria, joins their quest. Wil is unable to control the magic of the Elfstones for a time and believes that he is unable to protect Amberle but when the Reaper catches up with them at Safehold Wil is finally able to wield their magic and destroy the Reaper. Amberle is able to renew the life in the Ellcrys seed but in order to do so she has to sacrifice her own will. When they return to the garden where the Ellcrys is kept they find the Demons are already there and the Elven army almost defeated. Amberle takes the place of the Ellcrys and the boundaries are put back in place banishing all the Demons back to the darkness.

Wil refuses to ever use the Elfstones again and he and the Rover girl, Eretria, leave for Wil's home. Allanon leaves to sleep again until the next time he is needed and in this way giving himself an unnaturally long life. The kingdoms of Shannara are safe once again.

More summaries and resources for teaching or studying The Elfstones of Shannara.

The Elfstones of Shannara from BookRags. (c)2022 BookRags, Inc. All rights reserved.