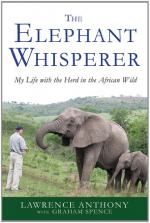 Lawrence Anthony
This Study Guide consists of approximately 40 pages of chapter summaries, quotes, character analysis, themes, and more - everything you need to sharpen your knowledge of The Elephant Whisperer.

This detailed literature summary also contains Topics for Discussion on The Elephant Whisperer by Lawrence Anthony.

“The Elephant Whisperer” by Lawrence Anthony with Graham Spence is a memoir about Anthony’s experiences as the proprietor and operator of Thula Thula a large animal reserve in middle Zululand in Africa. The focus of the story takes place in 1999, when Lawrence Anthony was contacted by an animal manager to offer him a herd of elephants at no cost. He suspected there was more to the story. As it turned out the elephant herd was an aggressive bunch that had become more than the owners of the reserve wanted to deal with. In fact, they had to shoot two of the elephants that belonged to the herd. The surviving elephants had been more traumatized than ever by the shooting of the elephants, one of which was the matriarch, the herd’s leader. Lawrence was their only hope. If he didn’t take them, they would all be shot.

Lawrence’s instinct was to say no because he knew having a herd of these humongous animals with apparently very bad natures would be the challenge of a lifetime. On the other hand he was an animal lover of the first order and he absolutely adored elephants. He didn’t hesitate more than a minute then agreed to take them.

When the herd arrived, it was soon confirmed to him that they were a troublesome lot. The new matriarch, who he named Nana, was frightened and in a rage. Lawrence’s staff had gone to great lengths to make a secure boma – a stockade like holding area – for the elephants. The plan was to confine them for a while until they settled down before they were released into the bush. But the elephants didn’t know about that plan. The very resourceful Nana figured out a way to break out of the electrified fencing that was constructed to contain the huge beasts.

It took days for Lawrence to get the elephants back. They were rampaging around the area and broke into a neighboring reserve. The local authorities had declared the rogue elephant herd a menace and danger to the people and property of the region and sent out armed rangers to take them down. But Lawrence was able to find them first and make arrangements to return them to the reserve.

Lawrence observed the elephants and understood that they had gone through quite an ordeal. It was his educated belief that he had to make peace with Nana, the matriarch, or things wouldn’t work out. Although Nan was naturally standoffish at first, Lawrence was tireless in his attempt to settle her and convince her to trust humans again. But he asked himself how he could reach her and explain that this reserve was her new home and that she and her herd were safe there. He decided to talk to her. Every chance he got he spoke to her, calling her by name and always using a calm and gentle voice.

Lawrence knew he had connected with her when she approached him while he sat in his Rover. He reached his hand out to her and she responded with her trunk. She stuck her trunk in the car window and investigated Lawrence’s face and torso. She soon took off to return to her herd. But after that incident, Nana never again appeared agitated or aggressive around Lawrence, and Lawrence never stopped talking to her.

More summaries and resources for teaching or studying The Elephant Whisperer.