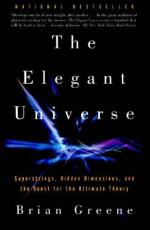 The Elegant Universe: Superstrings, Hidden Dimensions, and the Quest For… Summary & Study Guide

The Elegant Universe: Superstrings, Hidden Dimensions, and the Quest For Summary & Study Guide includes comprehensive information and analysis to help you understand the book. This study guide contains the following sections:

This detailed literature summary also contains Topics for Discussion and a Free Quiz on The Elegant Universe: Superstrings, Hidden Dimensions, and the Quest For by Brian Greene.

This book is a search for perhaps the oldest question of humanity: Why are we here? In a very literal sense, the book examines the "whys" for the physical properties that surround people in everyday life. These things are mostly taken for granted because they are so commonplace—gravity, for example. Isaac Newton formulated the "how" for gravity, but not the "why," leaving room for Einstein's formulation of special relativity centuries later, and from there the quest for the ultimate theory to explain all: the T.O.E., or "theory of everything." This led physicists to string theory.

The first few chapters provide background information necessary for readers who do not have an intimate understanding of physics. They explain the different forces and elementary particles: protons, electrons, neutrons, quarks, for examples. Then the book moves on to Einstein's theory of special relativity and the discovery of quantum mechanics, preparing the reader for the ultimate comparison to string theory.

Brian Greene takes the reader through string theory's history, patiently explaining important discoveries along the way that are necessary to understand string theory's implications. Much of the book focuses on explaining general relativity, special relativity, and quantum mechanics. This lays the foundation for latter chapters which explain that these independently accurate theories of the very large and very small dissolve into nonsense when they are combined. String theory is the remedy for this disconnect.

The theory proposes that point particles do not exist—instead, all matter is made of extremely tiny vibrating strings. The vibrations make up the elemental "particles," with certain vibrations corresponding to certain particles. Physicists have also confirmed the importance of symmetry in the natural world, using supersymmetry to approximate the important equations in string theory. The strings are a very tiny length, known as the Planck length, and settle the jittery quantum mechanical world by "smearing" out the energies. String theory declares that the fabric of spacetime can tear, contradicting Einstein's original notion, and is capable of encompassing such extremities as black holes into its own fabric. Though hailed as the theory to end all theories, string physicists were embarrassed to find five different ways that string theory could work—essentially, five different theories. However, recent ideas seek to unite the five theories into one overarching theory, known as M-theory. This theory, physicists hope, will be the T.O.E., though they are still possibly years away from discovering the mathematics to reach their conclusions. String theory is also not experimentally testable: physicists are waiting for current technology to catch up with them. However, the theory still has the potential to explain everything: from the Big Bang, to black holes, to the Planck length and beyond, no one can know how far string theory will reach.