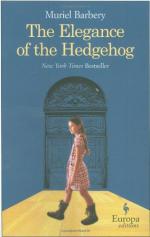 The Elegance of the Hedgehog Summary & Study Guide

Muriel Barbery
This Study Guide consists of approximately 29 pages of chapter summaries, quotes, character analysis, themes, and more - everything you need to sharpen your knowledge of The Elegance of the Hedgehog.

The Elegance of the Hedgehog Summary & Study Guide Description

The Elegance of the Hedgehog Summary & Study Guide includes comprehensive information and analysis to help you understand the book. This study guide contains the following sections:

This detailed literature summary also contains Topics for Discussion and a Free Quiz on The Elegance of the Hedgehog by Muriel Barbery.

The Elegance of the Hedgehog is a novel by writer Muriel Barbery. In this novel, Renee Michel is a concierge who believes that every concierge is perceived as unintelligent by those for whom they work. For this reason, Renee goes to great lengths to hide the fact that she often spends her days reading Marx and Tolstoy. It is not until Renee meets new tenant, Kakuro Ozu, that she finally finds a person with whom she can truly be herself. At the same time, Paloma Josse is struggling with the same sort of identity crisis. She is a highly intelligent girl who feels she must hide her real thoughts from those who do not understand her. In befriending both Renee and Kakuro, Paloma finds a way to relate to the outer world and find pleasure in life. The Elegance of the Hedgehog is a novel of personal identity that will inspire the reader to face life head on, rather than hiding behind masks that are designed to deceive not only the outside world, but ourselves as well.

Renee Michel is a concierge who goes to great lengths to hide her extraordinary intelligence from the tenants of the building where she works. When Renee's husband was alive, it was easy for her to hide her intelligence through his common habits, but after his death, Renee has found it more difficult to hide her lack of interest in television and her love of Marx and Tolstoy. However, Renee has found that the wealthy prefer to ignore what is right in front of their eyes and instead believe in what they perceive to be true. In this way, Renee has been able to hide just under the radar for more than twenty years.

In the building where Renee works, there is a twelve-year-old girl who has decided to end her life on her thirteenth birthday. Paloma Josse, the daughter of a diplomat and his bored wife, feels as though no one ever sees the true her. Paloma has decided that it would be easier to end her life than to continue fighting for some kind of recognition from her parents, sister, and peers. Therefore Paloma has chosen to end her life after setting fire to her parents' apartment in an attempt to force her family to see beyond their great wealth.

After the death of a tenant in the building, the widow decides to sell the apartment. This creates a great deal of excitement because there has not been a new tenant in the building in more than two decades. When Renee is introduced to the new tenant, Kakuro Ozu, she makes an offhand comment that alerts Kakuro to her love of Tolstoy's Anna Karenina. Kakuro is intrigued and later invites Renee to dinner in his apartment. At the same time, Kakuro befriends Paloma after learning that she is studying Japanese in school.

Renee and Kakuro become great friends. Renee is relieved to finally have a friend with whom she can be completely herself and who understands and shares her interests in literature, art, and philosophy. However, Renee struggles to reconcile herself with this relationship because her past has taught her that the social classes cannot mix without leading to some kind of disaster. Therefore, when Kakuro asks Renee to dinner at a restaurant to celebrate his birthday, she turns him down.

Paloma, who has begun coming to Renee's apartment to escape the chaos of her own home, forces Renee to share her reasons for refusing Kakuro's invitation. When Renee relates the story of how her sister died after being used and deserted by a rich man, Paloma goes to Kakuro with the information. Much to Renee's surprise, Kakuro assures Renee that she is not her sister and he has no plans to use and abuse her. Renee suddenly finds herself looking forward to the future for the first time. However, Renee's future is cut short when she is hit by a truck. Paloma, filled with grief by Renee's death, promises not to take her life, but to learn from Renee's experiences and live a fullfilling life.

More summaries and resources for teaching or studying The Elegance of the Hedgehog.

The Elegance of the Hedgehog from BookRags. (c)2022 BookRags, Inc. All rights reserved.