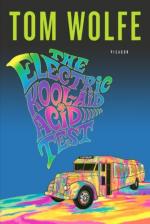 Tom Wolfe
This Study Guide consists of approximately 42 pages of chapter summaries, quotes, character analysis, themes, and more - everything you need to sharpen your knowledge of The Electric Kool-aid Acid Test.

This detailed literature summary also contains Topics for Discussion and a Free Quiz on The Electric Kool-aid Acid Test by Tom Wolfe.

Tom Wolfe writes about Ken Kesey, a promising young writer, during Kesey's experimentations with LSD from about 1961 to 1964. Kesey leaves his home in Oregon to do post-graduate work on a creative writing fellowship at Stanford University. There he encounters LSD and other psychoactive drugs while volunteering as a research subject. The effects of LSD on Kesey's perceptions draw him and others into the regular use of LSD, marijuana and amphetamines. A small version of the drug culture that is to follow develops.

The property where Kesey lives near Stanford is sold to land developers, so he moves to family property near La Honda, California. Others move with him, people who come to be known as the Merry Pranksters. Kesey and the Merry Pranksters continue taking drugs, install elaborate sound equipment on the property, and decide to take a road trip East with the eventual destination of New York City. The Pranksters buy an old school bus, paint it in Day-Glo colors and name it Furthur. They take a southern route through Texas, the South and Florida. Along the way, a young woman that Wolfe names Beautiful Witch loses her mind while on LSD. The Pranksters think that this was inevitable for her particular psyche and not a fault of the drug.

While back at the La Honda property, Kesey and the Pranksters invent The Acid Test, a party where LSD and other drugs are freely taken and the Pranksters put on a multimedia show. More Acid Tests are given in San Francisco and Los Angeles. The Tests prove to be money-makers and become a new music venue known as psychedelic. Jerry Garcia forms the Grateful Dead and performs at Acid Tests. The music starts a new music genre known as acid rock or rock jazz.

Kesey is busted three times for marijuana possession and runs to Mexico to avoid prosecution and jail. Other Pranksters follow, and when his location becomes known to the California press, many others also go to Mexico. Kesey has a vision during an electrical storm, where he realizes that everyone must move on past the drugs. He returns to the States with this message.

The American authorities do prosecute, but Kesey's lawyers keep him away from significant jail time. While out on bail, Kesey and the Pranksters put on a final Acid Test called the Graduation. Then Kesey and the Pranksters try to play a music venue, but they cannot capture their old energy. The crowd leaves, and the whole purpose that Kesey was trying to accomplish seems meaningless. Kesey returns to his hometown in Oregon, and the Pranksters scatter. One Prankster, Cassady, dies from a drug overdose.

More summaries and resources for teaching or studying The Electric Kool-aid Acid Test.