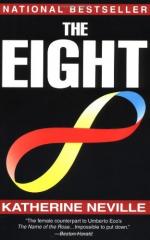 Get The Eight from Amazon.com
View the Study Pack
View the Lesson Plans
Study Guide
Order our The Eight Study Guide

Katherine Neville
This Study Guide consists of approximately 109 pages of chapter summaries, quotes, character analysis, themes, and more - everything you need to sharpen your knowledge of The Eight.

The Eight Summary & Study Guide includes comprehensive information and analysis to help you understand the book. This study guide contains the following sections:

This detailed literature summary also contains Topics for Discussion and a Free Quiz on The Eight by Katherine Neville.

The Eight, an intellectually and structurally complex novel, follows two narrative lines, each essentially telling the same story: a woman's pursuit of a mysteriously powerful artifact, a chess set known as The Montglane Service. Themes relating to the seductive power of revenge and the universal interrelationship of matter and spirit are woven into a suspenseful tapestry of multi-layered relationships and narrow escapes. Additionally, the story features fictionalized appearances by actual, historically important individuals.

The novel opens in France in the 1790s during the French Revolution. Two novice nuns, Mireille and Valentine, as well as the other nuns of their order, are given a mysterious and dangerous mission by their Abbess: to protect the pieces of the Montglane Service, a centuries-old chess set reputed to have mystical powers, from the greed of the leaders of the French Revolution. Mireille and Valentine are sent into the care of a distant relative in Paris, and are assigned by the Abbess to serve as a collection point - a place for nuns to hide pieces that are in danger of being captured.

The following section introduces the central character and situation of the contemporary narrative - Catherine, a musician and computer genius whose personal and professional integrity leads her to refuse involvement in an illegal land deal. This leads her to being transferred to Algiers and assigned to work for the government. Before she leaves, however, her friend Harry throws a farewell dinner party for her where she receives a mysterious warning of danger by an equally mysterious fortune teller.

This pattern of alternating chapters, between the Mireille narrative in the past and the Catherine narrative in the present, continues as Mireille and Valentine arrive in Paris, encounter one of the very revolutionaries the Abbess specifically warned them about, and become caught up in the violence of the Revolution. At the same time, Catherine finds herself caught up in the political and personal machinations of the world of international chess, attending (in the company of Harry's daughter Lily, whom she detests) at a match played between a Russian champion, Solarin and a British challenger, Fiske. The match is never played out; Fisk is murdered, and Catherine and Lily become the targets of a sniper. Meanwhile, in the past, Valentine is murdered, and Mireille is left to carry on the task of preserving the Montglane Service on her own.

While in Algiers, Catherine encounters Minnie, an attractive older woman who not only turns out to be the fortune teller, but also gives her Mireille's journal. As the final pieces of the past and present puzzles fall into place, Catherine comes to realize that Minnie is in fact Mireille, who had in the past uncovered the secret of the Montglane Service - the Elixir of Life, a source of immortality. Catherine also realizes that she has been chosen to take Mireille's place as the head of a secretive organization determined and possibly even destined to ensure that the power of the Service doesn't fall into the hands of those who would use it for evil. At the novel's conclusion, Catherine resolves to conceal the pieces of the Service where they can never be found, but nevertheless wonders what it would be like to follow in Mireille's path and, like her, drink from the Elixir of Life.

More summaries and resources for teaching or studying The Eight.

The Eight from BookRags. (c)2022 BookRags, Inc. All rights reserved.