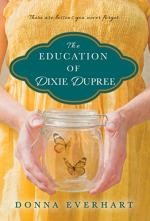 Donna Everhart
This Study Guide consists of approximately 90 pages of chapter summaries, quotes, character analysis, themes, and more - everything you need to sharpen your knowledge of The Education of Dixie Dupree.

The Education of Dixie Dupree Summary & Study Guide includes comprehensive information and analysis to help you understand the book. This study guide contains the following sections:

This detailed literature summary also contains Quotes and a Free Quiz on The Education of Dixie Dupree by Donna Everhart.

The following version of this book was used to create this study guide: Everhart, Donna. The Education of Dixie Dupree. New York: Kensington Books, 2016. Electronic edition.

The Education of Dixie Dupree tells the story of Dixie Dupree, an eight-year-old girl growing up in Alabama. The story is told in the first person from the perspective of Dixie, beginning in 1966 taking the reader through three years of Dixie’s life up until 1969.

The story starts as a retrospective with Dixie contemplating relinquishing her diary as “key evidence” (16) against a man called Uncle Ray. Chapter 1 foreshadows the following story as a review of the previous three years of Dixie’s life that has been contained within her diary as well as her Mother’s.

Chapters 2, 3, and 4 explore Dixies’ relationships with her immediate family. In Chapter 2 Mama hits Dixie in the face so hard it bruises. Dixie subsequently tells her father, who in turn beats her mother and brings the entire family to his parents’ house to review the situation. Dixie (after her mother asks her to do so) lies about her bruise to protect her mother. In Chapter 3 Dixie’s lying becomes a habit that enrages her mother and leads to additional beatings and more drinking from her father. In the second part of Chapter 3 and through Chapter 4 the reader learns about Mama’s past and her longing for her former home in New Hampshire. Dixie learns about how Mama and Daddy met and fell in love. She also learns that her mother is unhappy and Daddy’s parents do not approve of the marriage.

In Chapters 5, 6, and 7 Mama’s discontent escalates. In Chapter 5 Daddy takes a business trip and while he is gone Mama drives up to the house of a woman named Ms. Suggs – though never gets out of the car. Some of Dixie’s school friends are introduced in Chapter 6 and Dixie learns about what “white trash” means via their interactions and Mama’s fear of the label. After Daddy returns from his business trip in Chapter 7, the children overhear their mother asking for a divorce and Daddy refusing. A few days later, he confronts her with a gun and it accidentally fires – hurting no one but scaring everyone. Daddy leaves and at the end of Chapter 7 all the reader knows is that something happened to Daddy that distresses Mama, and he would be “home in a couple days” (247).

Chapter 8 starts as the day after Daddy’s accident. Dixie grabs the wrong tablecloth to play with – one of Mama’s favorites – and when Mama (who is already distraught) discovers the ruined tablecloth she beats and chokes Dixie mercilessly as her brother AJ stands by trying to fight Mama. Mama is stopped and Dixie is saved by the arrival of Aunt Margie. In Chapter 9 Mama tells the children that Daddy’s accident is “serious” though does not reveal more details except that they no longer have access to a car and are financially troubled (96). Dixie also decides to cover the bruises on her neck and lies at school when her friend and teacher Miss Taylor asks her about the scarf and blood-shot eyes. In Chapter 10 a social worker from Child Protective Services named Ms. Upchurch visits their home, and Dixie lies once again for her mother claiming she had just had a terrible stomach bug.

The reader prepares for and meets Uncle Ray in Chapters 11, 12, and 13. In Chapter 11 Dixie learns about the family’s difficult financial situation and that Mama’s brother Ray is going to come from New Hampshire and stay with them. At first Dixie is so hungry for affection and approval from an adult she is eager for his visit. In Chapter 12 Mama prepares herself, the children, and the house for Uncle Ray’s arrival. At the end of the chapter Uncle Ray arrives in his fancy car with presents in tow. In Chapter 13 Dixie becomes wary of Uncle Ray and AJ tells Dixie that Daddy has shot himself, though he is still alive in a coma. Chapter 14 marks the beginning of Uncle Ray’s inappropriate touching as he gropes Dixie at a local swimming hole on a family outing. In Chapter 15 Uncle Ray becomes very involved in their lives and starts driving Dixie and AJ to and from school every day.

Chapter 16 marks the moment when the Dupree family comes together at Mama’s house to make a decision about Daddy’s life support. Mama finally tells the children about the seriousness of their father’s situation and Dixie responds by demanding to see her father in the hospital. Uncle Ray goes after Dixie in her bedroom in Chapter 17 – touching and fondling her. The next day the family goes to the hospital where Dixie sees her father completely incapacitated and living off of machines. Dixie, still processing her new reality, gets in a physical fight outside with AJ in Chapter 18 – while the Dupree family and Mama decide to take Daddy off life support.

A few days later, in Chapter 19 Uncle Ray goes after Dixie in the bathroom with her family outside going even further than before – threatening her and reminding her of her vulnerable situation and all his generosity towards her family. Dixie decides to tell AJ but he does not believe her. The family takes Daddy off of life support and they hold a funeral in Chapter 20, which is where Ms. Suggs returns and has a brief interaction with Dixie. In Chapter 20 Mama also discovers that Daddy had a life insurance policy and the family would be all right financially.

During Chapters 21, 22, 23, and 24 Mama takes the children and Uncle Ray for a drive up to her home in New Hampshire. The children are reminded of Mama’s wild mood swings and temper flare throughout the drive, especially when an 18-wheeler chases Mama and Dixie down the highway. Uncle Ray gropes Dixie again while driving – threatening her further and cementing her certainty that no one will believe her if she accused him. Dixie meets her Aunt Trish (Ray’s wife), her cousin Jamie, and her grandparents Granny and Grandpa Ham (Mama’s parents). Dixie also learns about Ray’s recent troubles at work, and asks Granny Ham about Ms. Suggs about whom Dixie is still curious.

AJ and Dixie go to Aunt Trish’s house for a visit with Jamie and while there, Aunt Trish takes the boys to get drinks while Dixie decides to stay at their home alone. Uncle Ray finds Dixie alone at his house in Chapter 25 and rapes her. Aunt Trish returns home to find them in Chapter 26 and immediately throws Ray off Dixie, calls the police, calls the rest of family, and gets Dixie into an ambulance. After a tumultuous hospital visit, Mama decides to take the children home to Alabama.

Chapter 27 begins with Dixie finishing her Mother’s diary – a reference back to Chapter 1. Dixie learns that Uncle Ray raped Mama when she was a teenager – which is part of the reason she fled New Hampshire. Mama’s pregnancy resulted in AJ as well as her abrupt marriage to Daddy. She also learns that Mama is adopted and Ms. Suggs is her biological mother – the other part of Mama’s motivation to come to Alabama. Mr. Evans the prosecutor returns and tells the family Uncle Ray faces jail time, and Ms. Upchurch the social worker returns to work with to Dixie on not only recovery but also her relationship with her mother. The story ends on a positive note, with Dixie and her mother making amends as she walks outside to enjoy the end of her summer.

More summaries and resources for teaching or studying The Education of Dixie Dupree.

The Education of Dixie Dupree from BookRags. (c)2022 BookRags, Inc. All rights reserved.