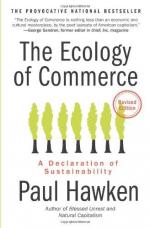 The Ecology of Commerce Summary & Study Guide includes comprehensive information and analysis to help you understand the book. This study guide contains the following sections:

This detailed literature summary also contains Topics for Discussion on The Ecology of Commerce by Paul Hawken.

Hawken presents the idea that the economy must change from one based on waste that causes damage to the environment to one that is a restorative economy. This change must take place in order to save the planet from destruction. This would be difficult to accomplish, however, since businesses in the economic system are based on the profit motive, meaning they use the cheapest production technique. Being environmentally aware is usually more expensive and since this does not help the profit position, it is usually not adhered to. Hawken discusses several environmental disasters, like Bhopal, and the business response to the situation. The multinationals come across as cold and inhumane and concerned only with costs, not with human lives.