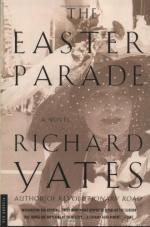 Richard Yates (novelist)
This Study Guide consists of approximately 24 pages of chapter summaries, quotes, character analysis, themes, and more - everything you need to sharpen your knowledge of The Easter Parade.

This detailed literature summary also contains Topics for Discussion and a Free Quiz on The Easter Parade by Richard Yates (novelist).

The Easter Parade is a novel by critically acclaimed author Richard Yates. This novel follows the lives of two very different sisters after the divorce of their parents in the 1930s. Sarah is a beautiful young girl who always felt secure in who she was and the love of her parents. After graduating high school, Sarah marries a handsome man who was raised in England. This marriage seems perfect on the outside, but hides a dark secret no one will learn until it is too late. Emily is Sarah's younger, less attractive sister. Emily grows up feeling as though she is constantly overlooked, as though she is an afterthought to her self-absorbed parents. Emily focuses on education and a career after high school, finding herself moving from one relationship to the next without thought of the future. The Easter Parade is a story of the impact of divorce on two very different girls, a novel that not only entertains, but leaves the reader with an overwhelming sense of the futility of life.

Emily and Sarah are two sisters who are forced to rely on one another when their parents divorce and their mother takes them from town to town as she searches for a way to make a life for herself in a world that is rarely kind to divorced women. Sarah, the older and more beautiful of the two sisters, often finds herself showered with attention from her distracted mother to the point where Emily feels left out and misunderstood. Once, when Sarah wants to go to a football game with a boy at school, Emily talks her out of it and finds herself the subject of scorn when their mother learns the truth. Emily also finds herself left out when Sarah gets braces on her teeth and is allowed to spend a day each week in the city with their father.

When Sarah graduates from high school, she is not interested in college but instead gets a job. Sarah falls in love and becomes engaged, but her absentee father suddenly becomes quite concerned with her future and asks some tough questions of her fiancée. When the fiancée cannot live up to expectations, he is chased away, leaving Sarah alone. A short time later, a new family moves into the apartment building where Sarah lives with her mother and sister. Pookie, her mother, pushes Sarah to meet the family's English raised son, Tony. Sarah begins dating Tony and they soon marry, taking up residence in the guest house of the estate owned by Tony's parents.

Emily grows up almost unnoticed by those around her. One night, Emily goes out to see a movie, but instead finds herself seduced by a young soldier on his way to war. A few months later Emily goes off to college where she has multiple love affairs. Most notably of these affairs is a young graduate student named Andrew who has a sexual dysfunction. Andrew ends his relationship with Emily for a year after telling her he plans to marry her, but must undergo psychotherapy first. The couple separate and Emily has more lovers, but when Andrew returns she readily submits to his marriage proposal. However, after an awkward visit to see Sarah and her growing family, Andrew becomes verbally abusive. Emily quickly divorces her new husband.

Emily finishes college and goes to work for a food magazine, where her editor is a renowned poet. Emily and the poet begin an affair that takes them to the wilds of Idaho, where the poet takes a job teaching at a university. The relationship becomes rocky as the poet displays attacks of insecurity. Even a trip through Europe is blighted by the poet's memories of his first wife. Emily ends the relationship and returns to New York, where she takes a job as an advertising copy writer. In time Emily meet another man, Howard Dunninger, who would be the perfect man if not for the fact he is still in love with his soon-to-be ex-wife.

Emily becomes reacquainted with her sister through the turmoil of their mother's sudden illness. When Sarah comes to New York for a rare visit, Emily learns that Tony has been physically abusive to her their entire marriage. Sarah turns to Emily for help, but Emily turns her down. Not long afterward, Sarah dies from a fall in her home, an accident Emily comes to believe was the result of her husband's cruelty. Pookie dies not long after Sarah, followed by Howard's reunion with his wife after a six year separation, leaving Emily completely on her own. On top of this, Emily loses her job as well. On a visit to see her nephew, Emily falls apart, blaming everyone for the death of her sister. In the end, her nephew still welcomes her home, leaving Emily humbled by the only family she has left.

More summaries and resources for teaching or studying The Easter Parade.