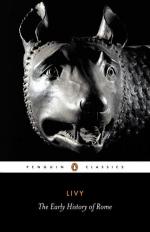 There are three pieces of introductory material preceding the main text itself. This section covers all of the 'preambles' and the first half of what in the main body of the books is 'book 1'. The first of the set of books is named 'Rome Under the Kings'.

One of the difficulties for every historian is that of origins. The author clues people into the truth of the beginning of Rome. He refers to the first people that anyone is mostly certain of.

He clearly expresses that from his perspective, it was rather the rule than the exception for their to be a mingling of human and divine beings in the ancestry of a noble lineage.

Before even Titus Livius has begun the scholars tell readers that...