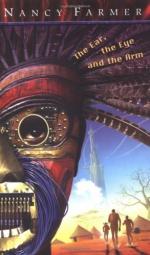 The Ear, the Eye and the Arm Summary & Study Guide

Nancy Farmer
This Study Guide consists of approximately 21 pages of chapter summaries, quotes, character analysis, themes, and more - everything you need to sharpen your knowledge of The Ear, the Eye and the Arm.

The Ear, the Eye and the Arm Summary & Study Guide Description

The Ear, the Eye and the Arm Summary & Study Guide includes comprehensive information and analysis to help you understand the book. This study guide contains the following sections:

This detailed literature summary also contains Topics for Discussion on The Ear, the Eye and the Arm by Nancy Farmer.

The plot moves in a direction familiar to readers of fantasy fiction: the hero(s), in this case three children who range in age from very young to pre-adolescent, face trials and tribulations that include weird monsters and strange places. They overcome their challenges through a combination of courage, cunning and the help of at least a few benevolent characters. The children—Rita, Kendai and Kuda—are the coddled offspring of Zimbabwe strongman General Amadeus Matsika and his wife. They endure kidnapping, exploitation, demonic possession and terrors galore as they fall into the clutches of the netherworld inhabited by genetic freaks and ancient tribal spirits. As they search for freedom from this dark underground, the runaways are tracked by three detectives known as the Ear, the Eye and the Arm designating their physical abnormalities caused by exposure to toxic wastes. Their journey toward freedom is also assisted by Trashman, another example of genetic mutation, who uses his powerful physical strength to protect them although he has the mind of a four-year-old child. Trashman is strong, protective and loyal although he is also at times reckless and without refinement.

In this post-apocalyptic world, it is difficult to distinguish friend from foe, and the childrens' struggle is made even more difficult because of their lack of exposure to the real world and its inhabitants beyond the reach of their innocent lives and the protection of a powerful, benevolent father. The plot is based on an ancient narrative archetype of a fall from grace (or, biblically, Eden), struggle through the wilderness (or, biblically, knowledge which is sin), and final redemption through their own struggles and reliance on a divine presence (or, in this case, ancestor spirits that arise to help them). The author is very skillful at weaving ancient African tribal beliefs and customs into a story set in the futuristic 2194 where people travel by airborne taxis and are served by a variety of robots, some of them exhibiting quite human characteristics. The children eventually make it back to their safe, nurturing home, battered but wiser about the world and themselves. This is basically a convoluted scary story with a happy ending. While some of the protagonists' adventures might give younger readers nightmares, the eventual positive resolution and salvation of the children may also prove satisfying and reassuring about the strength of families to endure hardships.

More summaries and resources for teaching or studying The Ear, the Eye and the Arm.

The Ear, the Eye and the Arm from BookRags. (c)2022 BookRags, Inc. All rights reserved.