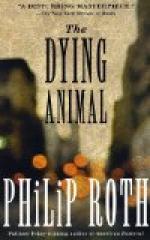 This Study Guide consists of approximately 37 pages of chapter summaries, quotes, character analysis, themes, and more - everything you need to sharpen your knowledge of The Dying Animal.

This detailed literature summary also contains Quotes and a Free Quiz on The Dying Animal by .

The following version of this book was used to create the guide: Roth, Philip. The Dying Animal. Vintage International, 2001.

David Kepesh, a cultural studies professor at an unnamed New York university, begins his first-person, confessional narrative by recalling his affair, eight years ago, with his former student, 24-year old Consuela Castillo. David frequently has affairs with his former students; however, Consuela seemed different. She had a maturity that the others did not. After their class was over, David threw a party at his apartment, and asked Consuela out. They eventually have sex, and David becomes addicted to her beauty. He also becomes jealous and paranoid that she will leave him for someone her own age.

Their sexual affair becomes more adventurous with time, crossing various lines of comfort (but not consent), and their emotional affair becomes more intimate, more committed, even though David resists this passionately. He values his independence, his sexual freedom, and draws parallels between his ideas of promiscuity and those of Merry Mount, an anti-Puritanical hedonistic community, and the Swinging 60s, where free love reigned. He digresses frequently on topics of interest to him, whether they be historical, philosophical or anecdotal, about friends and relatives who serve as foils to his behavior.

He has a long-standing sexual relationship with Carolyn Lyons, a former student; he has a long-standing dispute with his estranged son, Kenny, who has resented his father for his libidinous ways and who now is having an affair himself; and he has a long-standing friendship with poet George O’Hearn, a man of a similar age and perspective, and who dies suddenly later in the novel after a stroke at a book event. Carolyn becomes frustrated with David when she finds Consuela’s used tampon and realizes that he is sleeping with other women, though David tries to convince her that he is not. Kenny comes to his father for advice about his affair, which is becoming increasingly serious; he even contemplates meeting his mistress’s family. David, however, has more criticism than advice, and Kenny leaves as angry as ever.

Meanwhile, David’s relationship with Consuela comes to an abrupt end when she invites him to a graduation party at her parents’ house, and David does not come—afraid of being ridiculed by her family for the age difference between him and their daughter. She breaks up with him, and he is predictably devastated. Several years pass. On New Year’s Eve, in 1999, she phones him, revealing that she has breast cancer and is having surgery soon. She wants David to take pictures of her breasts before the doctors remove them. David agrees and tries to comfort her as well as he can. He asks if she wants to sleep with him, and she declines. In fact, she asks that he not try to contact her again; however, on the day before her surgery, she calls him in a panic, asking for help. The novel ends with him contemplating whether or not to go, because he knows that if he goes, he is “finished.”

More summaries and resources for teaching or studying The Dying Animal.