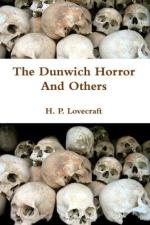 H. P. Lovecraft
This Study Guide consists of approximately 22 pages of chapter summaries, quotes, character analysis, themes, and more - everything you need to sharpen your knowledge of The Dunwich Horror.

This detailed literature summary also contains Quotes and a Free Quiz on The Dunwich Horror by H. P. Lovecraft.

"The Dunwich Horror" is a 1928 short story by cult-favorite horror author H.P. Lovecraft. The story is also part of a literary universe known as the “Cthulhu Mythos.” While the work was originally published in the magazine, “Weird Tales,” it has since been printed in many other forms.

The recollection starts with the birth of Wilbur Whateley, the son of a strange albino woman, Lavinia, and an unknown father. He lived with his mother and his grandfather, Old Whateley, also known as the Wizard Whateley. The boy grew incredibly fast in terms of mental capabilities, maturity, and height. Eventually, the boy’s grandfather began teaching him about the occult and bought him many occult related books. The two also began renovating their property adding rooms and removing walls as if they were hiding something.

After Lavinia disappeared and Old Whatley died, the boy began to search for the grimoire known as the Necronomicon for an unknown purpose. He eventually went to Miskatonic University and met the librarian, Dr. Armitage. He asked Armitage if he could borrow the untranslated copy of the work but Armitage refused. Armitage then looked at the book and learned that Wilbur was trying to do something nefarious.

Not long after, Wilbur attempted to break into the Miskatonic University library in order to steal their copy of the Necronomicon. Wilbur was killed by a guard dog. His corpse revealed his true form, witnessed by Armitage and his colleagues Rice and Morgan. It was covered in tentacles and was rather unhuman. His body then disintegrated before their eyes.

Not long after, the creature known as the Dunwich Horror escaped from the Whatley home and began nightly rampages throughout the town. The professors eventually learned of this and Armitage decided that he needed to act. Through his research, Armitage discovered that a spell could vanquish the Horror.

The Horror made a path towards Sentinel Hill. A few days afterwards, the professors arrived and confronted the beast. They sprayed a powder on the being, revealing it to be rather similar to a mixture of Wilbur’s true horrifying form and the Whately family’s human members. Armitage and the professors chanted a spell at the beast until a lightning strike caused the monster to disappear. The narrator then describes that the entire ordeal was covered up.

More summaries and resources for teaching or studying The Dunwich Horror.