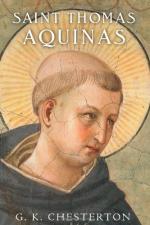 Scholasticism is a general term to refer to the school of philosophy that developed in Catholic universities from roughly the 12th century. Prior to St. Thomas, Scholasticism was dominated by Platonism; however, due to his diligent work, Scholastics became primarily Aristotelians. Chesterton sees the Scholastics as sharply declining after St. Thomas' death.

Manicheanism was a philosophy that came to Europe from the East, and which saw nature as intrinsically evil, or at least saw evil as existing naturally. Manicheanism took many forms, but in St. Thomas' time, the most recent forms were the Albigensians who had been converted...