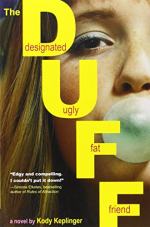 Get The DUFF from Amazon.com
View the Study Pack
Study Guide
Order our The DUFF Study Guide

Kody Keplinger
This Study Guide consists of approximately 42 pages of chapter summaries, quotes, character analysis, themes, and more - everything you need to sharpen your knowledge of The DUFF.

The DUFF Summary & Study Guide includes comprehensive information and analysis to help you understand the book. This study guide contains the following sections:

This detailed literature summary also contains Quotes and a Free Quiz on The DUFF by Kody Keplinger.

The Duff, by Kody Keplinger, is a novel of transformation and offers the reader a myopic view of life as a teen-aged outsider. The novel begins as the protagonist, Bianca Piper, goes with her best friends, Jessica and Casey, to the local teen nightclub. While there the reader sees the two girls take off and immediately start dancing with the cute boys on the dance floor while Bianca hangs out at the bar and talks to the bartender, Joe. Bianca orders a Cherry Coke, her usual, and resigns herself to being a wallflower, watching her better than average and beautiful friends have a good time.

She's only there for a few minutes when a boy approaches Bianca. His name is Wesley Rush and he is a notorious womanizer, so Bianca is confused when he sits down next to her and begins a conversation. After a few minutes the confusion is cleared when he tells her that he's trying to be friends with her, the DUFF, in order to get closer to Jessica and Casey. Bianca asks what DUFF is and Wesley tells her that it is an acronym for designated ugly fat friend. Bianca is mortified and horrified. Already suffering from low self-esteem issues, this just knocks her down a few more pegs. She throws her Cherry Coke all over him. She gets her friends and they leave.

At Bianca's home the reader learns that her mother has written a self-help book and is a motivational speaker, and is not there most of the time. Her father is a recovering alcoholic, though she sees him with booze in his hands most nights. She thinks about the DUFF title that Wesley has given her and is angered that it hurt her so badly. She determines not to let it get to her, but when she goes to school the next day and sees Wesley, she remembers the whole humiliating incident and is hurt by it all over again. To make matters worse, the boy that she has been secretly crushing on has a new girl on his arm.

Later that evening she finds herself back at the bar with her friends, though she hadn't wanted to go. Her father told her that he wanted to be alone. While at the bar she runs into Wesley again and they engage in some verbal sparring. He tells her that girls really like it when you are nice to their DUFFs and that he'll score more with them if he is nice to Bianca. Angered beyond belief and upset with her father, Bianca impulsively kisses Wes. He's shocked at first, but goes along with it. She instantly regrets it, but her friends tell her that it is no big deal the next day.

Casey and Jessica agree that they will all sit out Homecoming this year, as none of them have dates. Instead, they decide that they will have a girl's night at Jessica's house. While there, Bianca walks past Jessica's brother's room and Bianca remembers the very brief and very sexual relationship she had with Jessica's 17-year-old brother when she was a freshman. He used her and dumped her and, because of that, she's hated relationships and dating ever since.

She gets paired up with none other than Wesley for an English report and she invites him over to get the paper finished. However, when she comes home from school the house is trashed and she finds her father passed out drunk on the couch. She concludes that he has fallen off of the wagon and is horrified at the thought of Wesley coming over to see all of this. She quickly calls Wesley and goes to his house...which is a huge mansion. Bianca is so upset at her father that in a moment of weakness while she's at Wes's house, she initiates sex with him. She quickly regrets it, but also admits that it was nice. She is conflicted about how she feels about it since she knows he doesn't really care for her.

At school the next day Bianca learns that Jessica's brother, Jake, is coming back into town with his Fiance. She's devastated and when she sees Wesley later on in the day, pulls him into a janitor's closet and makes out with him. She also makes arrangements to come over to his house later that day to have sex with him again. He agrees, but is surprised since she seems to hate him. When Bianca goes home after school she learns that her father's downward spiral is the result of her mother serving her father with divorce papers, but he tells her that it is all just a big mistake and that he'll talk to Bianca's mother and it will be all right.

Bianca goes over to Wesley's and have sex. Wesley knows that she's using him, and he goes along with it, but at the same time has become intrigued as to why she would be behaving this way. She tells him about Jake. Later, they go to the Nest (the teen dance club), separately, and Joe the bartender picks up on the fact that they are in to each other. Bianca vehemently denies it.

Valentine's Day Bianca ends up with the dubious honor of helping the school secretary deliver all of the flowers and gifts to everyone. The day turns better when she finds out that Toby, the boy she has had a crush on, is also handing out the Valentine's Day gifts. He tells her that he broke up with his girlfriend, and Bianca is happy. He asks if she will sit with him in AP Government class. Then the day goes south when her mother checks her out of school to tell her about the divorce, which is still very much happening. After listening to her mother she realizes that the divorce had to happen and that her father is more flawed than she thought. She tells her mother that she's going to spend the night at a girl's night out at Casey's but she goes, instead, to Wes's.

While there Bianca learns that Wes's home life sucks, too. His parents travel all of the time, his sister lives with his grandmother, and the grandmother hates Wes. He's very much alone. They both confide in each other and grow closer. He stops calling her Duffy.

Casey and Jessica are upset with Bianca because she ditched them on Valentine's Day for the girl's night out. Bianca tells them that her family are getting divorced and that seems to soothe their feathers somewhat. Meanwhile, Toby reaches out to Bianca and then asks her out. Bianca feels as if she should be excited, but she's not. She keeps comparing Toby to Wesley in almost every category.

Her car breaks down and Wes offers to give her a ride. When they get to her house she invites him in and they go up to her room. They start to make love but then they hear Bianca's father come home early. They decide to stay up in her room and stay quiet until her father fell asleep. They play scrabble for four hours. Later, when she thinks the coast is clear, they come down the stairs. Her father is definitely drunk, but not asleep. He attacks Bianca, slapping her and knocking her to the ground. Wes defends her and punches her father. He takes Bianca and the two go back to his house. They grow closer as a result of the incident, but in the morning Bianca is confused and embarrassed by everything. She calls Casey to come and get her, leaving Wes confused and stunned at her behavior.

Bianca tells Casey everything and the two reconcile. When Bianca gets to her house she realizes that she's left her keys and can't get in. She is forced to knock on the door. Her father, now sober, opens the door and pulls her inside. He apologizes profusely and praises Wes for stepping in to defend her. They talk for a long time about things.

Bianca gets ready to go out on a date with Toby and her friends help her do her hair and makeup. They are excited for her because they know that she's liked Toby since the fifth grade. They promise to wait up for her for details. Toby comes over to Bianca's house and they go up to her room to work on an AP assignment together. While up there Bianca decides to see if he wants to have sex, thinking that doing so will remove Wes from her life and mind forever. Just as things are heating up someone knocks on her bedroom door. It is Wes. He leaves upset and hurt. The next day she finds a note in her seat at school from Wes telling her that he doesn't normally chase girls, but that he is going to chase her. Then, a few days later, he sends a huge bouquet of flowers with a longer note. The note tells her that he loves her and that she loves him, but just won't admit it.

The next day at school, Wes's sister, Amy, pulls Bianca aside and says that whatever she's been doing to change Wes that she and the family are grateful. Bianca can't think of anything she's done, but is flattered. They have been avoiding each other and Toby asks her to go to the Nest that evening with him. She agrees. When she gets to the dance club she orders a diet coke, not her usual cherry coke, and talks with Toby. Wes shows up. He can't take his eyes off of Bianca. Toby sees this and tells Bianca to go to Wes. He admits that he's also not over his ex-girlfriend. They part as friends and Bianca goes to find Wes. They reconcile and admit their love to each other.

More summaries and resources for teaching or studying The DUFF.

The DUFF from BookRags. (c)2022 BookRags, Inc. All rights reserved.