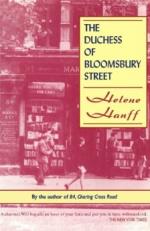 Helene Hanff
This Study Guide consists of approximately 26 pages of chapter summaries, quotes, character analysis, themes, and more - everything you need to sharpen your knowledge of The Duchess of Bloomsbury Street.

The Duchess of Bloomsbury Street Summary & Study Guide includes comprehensive information and analysis to help you understand the book. This study guide contains the following sections:

This detailed literature summary also contains Topics for Discussion and a Free Quiz on The Duchess of Bloomsbury Street by Helene Hanff.

The Duchess of Bloomsbury Street by Helene Hanff is a sequel to Ms. Hanff's wildly successful book, 84, Charing Cross Road. Ms. Hanff received many fan letters after the publication of her book asking what happened next, so she published this detailed account of a visit she made to London for the English publication of 84, Charing Cross Road. In this book, Ms. Hanff met the widow of Frank Doel, the man with whom she corresponded for twenty years in 84, Charing Cross Road. Ms. Hanff also fulfilled a lifelong dream of seeing many of the literary landmarks in England, including Trinity College where John Donne often walked in the yard. The Duchess of Bloomsbury Street is a tour through England seen through the excited eyes of a woman who has dreamed of this trip all her life.

Ms. Hanff left New York just days after leaving the hospital, excited to finally see the country she has always wanted to visit. Ms. Hanff worried on the plane of what would happen if no one remembered to meet her plane, but reassured herself with the many letters she had received not only from her publisher, but fans as well. Ms. Hanff was going to London for the English publication of her book, 84, Charing Cross Road, which chronicled a correspondence she had with Frank Doel, the chief buyer for the booksellers, Marks & Co.

Ms. Hanff arrived and was paged to meet a man waiting to meet her. This man was The Colonel, a fan of her book who happened to work at the airport. The Colonel helped Ms. Hanff though customs and helped her find her friends, Nora and Sheila Doel. From there, Ms. Hanff checked into her hotel and spent several minutes trying to convince herself she was really in London. The following day, Ms. Hanff went to see Marks & Co., which had since closed down with a photographer, and to be interviewed with Nora about the correspondence Ms. Hanff shared with her now deceased husband.

For the next few days, Ms. Hanff was busy with interviews and book signings. Soon, however, Ms. Hanff was free to tour London at her leisure. A friend in New York had arranged for Ms. Hanff to meet a friend of hers, Pat Buckley, who could show her around. This visit went well, despite a rocky start. Ms. Hanff saw a pub where Shakespeare once drank and drove past the Tower of London to witness the locking of the gates.

Ms. Hanff met up with some old friends from Texas who were visiting the city and had lunch at Claridge's. Later they had a nice dinner after nearly crashing a play in their dirty, day clothes. Ms. Hanff also met Joyce Grenfell, an actress she had long admired, and took a trip to Oxford with The Colonel. Ms. Hanff also met Leo Marks, the son of the Marks who owned Marks & Co, and his wife Ena, a portrait painter. Ena would eventually convince Ms. Hanff to sit for a portrait, something that made Ms. Hanff very nervous because she hated to have her picture taken in any form.

Ms. Hanff stayed in London nearly a month, visiting every place she had ever read about. Ms. Hanff often walked through the streets alone, enjoying the sights and sounds of England. When it came time to go home, Ms. Hanff found herself thrown several goodbye parties. Finally, on the plane, Ms. Hanff wished a wistful goodbye to London and began to focus on life back in New York City.

More summaries and resources for teaching or studying The Duchess of Bloomsbury Street.

The Duchess of Bloomsbury Street from BookRags. (c)2022 BookRags, Inc. All rights reserved.