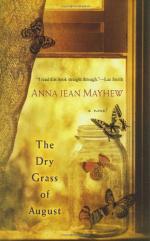 Anna Jean Mayhew
This Study Guide consists of approximately 26 pages of chapter summaries, quotes, character analysis, themes, and more - everything you need to sharpen your knowledge of The Dry Grass of August.

The Dry Grass of August Summary & Study Guide includes comprehensive information and analysis to help you understand the book. This study guide contains the following sections:

This detailed literature summary also contains Topics for Discussion on The Dry Grass of August by Anna Jean Mayhew.

The story begins in August 1954. The reader is introduced to the Watts family which consists of Paula Watts and her husband William. Paula and William have four children: Estelle Annette Watts aka Stell or Stell Ann; June Bentley Watts aka Jubie; Carolina Watts aka Puddin; and David William Watts aka Davie. The family is preparing to leave their home in Charlotte, North Carolina to go on a vacation to Pensacola, Florida to visit Paula's brother Taylor.

While the main part of the book takes place in 1954, there are alternating chapters to fill in the backstory. The alternating chapters begin before 1952 but focus mainly on that year. In 1952, the Watts family moved into the house on Queens Road West in Charlotte. That is when things began to change.

At one time Paula and Bill Watts had been happy. Bill began to drink and while his business is successful, he becomes involved in illegal activity that results in a boy's death. He is also part of the White Businessman's Association, a group that intends to prevent blacks from voting. The issue of segregation is a major topic throughout the book, as is racism.

The family lives in a large house on Queen's Road West in Charlotte. The area is peaceful with tree-lined streets.

In the 1950s the South was going through a major upheaval regarding Civil Rights, from the decision on Brown vs. the Board of Education to the integration of schools.

The people in the South have very deeply rooted traditions, customs and belief systems that go back for hundreds of years. The South rebels against change in part because the people are comfortable with what is and believe that the blacks are lesser individuals. Some - black and white - balk at change in general and feel that changing things would be too difficult and not worth the trouble.

The story is told by Jubie, a 13 year old girl who is growing up much too fast. Jubie lives in the shadow of her older sister, Stell. Stell seems to be the golden child while Jubie always seems to be in trouble. However, Mary, the Watts' maid, always looks out for Jubie and is on her side.

The entire family, save Bill, goes to Florida for a vacation. While there, it is clear that something is troubling Paula. The girls learn that their father has had an affair. On the way to Pawleys Island to meet Bill and others, a drunk driver hits the family Packard and causes damage. Even though Paula is angry with Bill, she calls to have him come to oversee the repairs. While in Georgia, Mary is beaten, raped and killed.

Jubie steals the family car to attend Mary's funeral. The people at the church tell Jubie they intend to find Mary's killer. A 19 year old boy is eventually arrested for the crime.

A young boy is killed after a job performed by Bill and his brother falls apart. The brother kills himself. Bill and Paula end up splitting up. Bill leaves Paula and the children behind. A new phase of life is about to begin.

More summaries and resources for teaching or studying The Dry Grass of August.

The Dry Grass of August from BookRags. (c)2022 BookRags, Inc. All rights reserved.