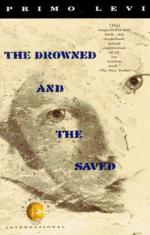 The Drowned and the Saved Summary & Study Guide

Primo Levi
This Study Guide consists of approximately 34 pages of chapter summaries, quotes, character analysis, themes, and more - everything you need to sharpen your knowledge of The Drowned and the Saved.

The Drowned and the Saved Summary & Study Guide Description

The Drowned and the Saved Summary & Study Guide includes comprehensive information and analysis to help you understand the book. This study guide contains the following sections:

This detailed literature summary also contains Topics for Discussion and a Free Quiz on The Drowned and the Saved by Primo Levi.

The Drowned and the Saved presents a thematic treatment of the Holocaust, revealing the how it is remembered, forgotten, and stereotyped by surviving victims, the perpetrators, and subsequent generations. Survivor Primo Levi relates how to very few live to tell their stories and unmasks the true depths of Nazi evil.

Survivors' stories are the basis for understanding the Nazis' "final solution," the physical evidence having been largely destroyed to make it all appear fictitious. The stories, however, have limitations as historical sources. One of these is that both victims' and perpetrators' "Memory of the Offense"over time become stylized and stereotyped, for very different motivations. Most listeners want there to be stark black/white, good/bad, but the Lagers are a vast "Gray Zone," where almost every survivor has some degree of guilt as a victim-collaborators, and the oppressors are not uniformly evil. All prisoners in and after the Lager feel "Shame," having been diminished by being forced to live at an animal level, without emotions, and with their moral yardstick changed. "Communicating," pictures how people from across Europe and of all cultural levels are thrown together in a state of chaos and coercion in the Lagers and have to learn a special brand of German to survive.

"Useless Violence," depicts how the Third Reich does not carry out the "final solution" in an "economical" way, but makes sure that every detail contributes to the victims' collective agony. "The Intellectual in Auschwitz," tells the story of Hans Mayer/Jean Améry, and presents his and Levy's generally consistent views on the pros and cons of being an intellectual in an atmosphere like the Lager. Non-intellectuals seem to have it easier because they do not search for a why, and believers have a better chance of survival because they look beyond the current hell. "Stereotypes," sets straight why audiences' inevitable questions about escape, rebellion, and avoiding capture "beforehand" are romantic and unrealistic. Levi wonders, in the nuclear age, why do Europeans not flee to the regions that might avoid destruction?

Finally, "Letters from Germans," summarize the limited but heartfelt response to the German translation of his Survival in Auschwitz. This closing chapter helps illustrate much of what he has said about memory, guilt, and communication. The Conclusion suggests the dangers of new generations losing interest in the Holocaust and risking the rise of another Hitler.

More summaries and resources for teaching or studying The Drowned and the Saved.

The Drowned and the Saved from BookRags. (c)2022 BookRags, Inc. All rights reserved.