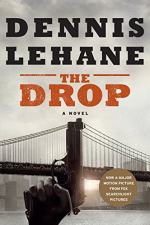 The Drop Summary & Study Guide includes comprehensive information and analysis to help you understand the book. This study guide contains the following sections:

This detailed literature summary also contains Quotes and a Free Quiz on The Drop by Dennis Lehane.

“The Drop” is a crime novel by Dennis Lehane which revolves around the characters who own, run, or frequent Cousin Marv’s Bar in the Flats, in Boston Massachusetts in the present day. Cousin Marv’s Bar is a front for the Chechen mafia, which runs the city. Cousin Marv is owned by Cousin Marv, who years before, had his own crew, but folded into the Chechens rather than fight them. Cousin Marv is now a fence for the Chechens, with his bar actually being owned by them. Cousin Marv is awaiting his chance to get out of the city, to strike it rich somehow. Bob Saginowski, Marv’s cousin, tends bar at Cousin Marv’s, and is seen by everyone as a good guy. He attends Saint Dominic’s Catholic Church regularly, though he never takes Communion, and though he is an ardent supporter of the traditions of the Church, he leans left on social issues. Another faithful attendee of church is Evandro Torres, a police detective who, despite numerous flaws including adultery, always comes clean to God, believing Confession is better than therapy or AA.

One night while walking home, Bob discovers an abused, abandoned puppy in a garbage can. The woman who owns the garbage can, Nadia Dunn, does not own the puppy, and invites Bob in to clean the puppy up. She agrees to help him get settled with the puppy, because Bob has decided to take the puppy in. He names the puppy Rocco, after the patron saint of dogs. Back at work, the Fitzgerald brothers, Bri and Fitz, hold up Cousin Marv’s. Marv tries to reason with them, telling them the bar is not what it seems. The Fitzgeralds do not care, and make off with $5,000 in cash. Bob notices that one of the robbers wears a broken wristwatch, a fact which he passes on to Torres, who handles the case. Torres believes the Cousin Marv’s is a drop bar, though Bob and Marv deny this. Torres contacts his former lover, Detective Lisa Romsey, who reveals that Cousin Marv’s bar factors into the disappearance of Richie Whelan some ten years before, who left the bar to score some weed and never returned. This intrigues Torres who decides to pursue the cold case in light of the recent robbery.

As it turns out, the Fitzgeralds are working for Marv – and one of them, Bri, is caught and killed. Fitz tries to back out of the deal, and Marv runs him over with his car. Meanwhile, a sociopathic murderer, Eric Deeds, also a local, has been threatening to kill Nadia and Rocco if Bob does not return Rocco to Eric, or give Eric $10,000. Eric says he is the one who killed Richie Whelan. Eric was also once in an abusive relationship with Nadia, and he leaves the dog in her garbage can as a way to get her to think about him. Bob doesn’t want any harm to come to Nadia or Rocco, so he decides he will give Eric the money. Marv, upon learning about Eric, goes to see Eric, telling Eric not to mess with Bob. He then hires Eric to rob the bar on Super Bowl night, when the Chechens will use the bar as a drop for millions of dollars. The plot fails horribly. Bob ultimately kills Eric, and the Chechens kill Marv. Bob is rewarded with Celtics tickets and money for his part in things. Torres learns, from one of Eric’s old partners, that it was not Eric who killed Richie Whelan. It is Bob who actually killed Richie Whelan 10 years before, toward the end of Cousin Marv’s days of running a crew. Without any hard evidence to go on, all Torres can do is let things be as they are. Yet he knows at the same time that some sort of street justice has occurred, and is able to shake Bob’s hands after church at the end of the book.

The Drop from BookRags. (c)2022 BookRags, Inc. All rights reserved.