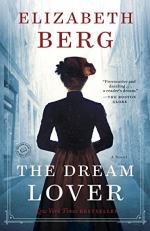 Related Topics
The Story of Arthur Truluv
The Confession Club

Elizabeth Berg
This Study Guide consists of approximately 83 pages of chapter summaries, quotes, character analysis, themes, and more - everything you need to sharpen your knowledge of The Dream Lover.

This detailed literature summary also contains Quotes and a Free Quiz on The Dream Lover by Elizabeth Berg.

The following version of this book was used to create this guide: Berg, Elizabeth. The Dream Lover. Penguin Random House, 2015.

Aurore Dudevant, also known as George Sand, tells her story from beginning to end in this historical fiction novel written by Elizabeth Berg. The author clearly notes above her copyright information, that the book is purely fiction despite using names of actual people, including Dudevant who wrote as George Sand. The first person point of view journal entries skip back and forth between various states of Aurore's life from beginning to very end, literally. She even describes her birth and her funeral. The journal entries are most often dated only by month and year, indicating that the author is recalling the information instead of writing it as it occurs. Additional proof of this is that she could not have written the journal entries as they happened when she was a very young child.

Aurore is distraught over her loveless marriage and the French laws that make it difficult to change her circumstances. She actively seeks love and success as a writer. Success comes first, but with several lessons about love learned throughout the book, she learns the truest love of all is that she has for her grandchildren. She also learns that the most important thing about life is to be yourself.

Aurore has many experiences in the story. First, she recalls the feelings of doubt she had about her choice to leave her family home to pursue a writing career in Paris. The reader learns that she is also hoping to further a romantic relationship with a young man named Jules who lives in Paris, making her reason for leaving the children behind seem less noble and more selfish.

After she and Jules eventually break up, there are many other lovers in her life. She became infatuated with an actress named Marie Dorval. Dorval also was a real-life actress and friend of Aurore, although real-life rumors of a lesbian relationship between the two were never confirmed. In this story, their lesbian encounters are limited, but their friendship remains up to Marie's death. In the story, Aurore still longed for continuing their intimate relationship. Eventually she moved on, and dated composer Chopin.

The story depicts a world in which women have very little control over their own lives. Women are so devalued that they even lose control of their own inheritances. Fearing that Casimir had only proposed to marry for money, Aurore's mother arranged a pre-nuptual agreement for Aurore and her husband. Although she could not control her inheritance, the agreement made sure that Aurore received annual funds from it. Her husband had affairs, but if Aurore had left him, he would have maintained control of her money according to the laws of the era. If he had discovered, however, that she was having an affair, he would have been able to divorce her and keep all her inheritance.

The story also reflects society's lack of religion in the era. When Aurore wanted to become a nun, her grandmother withdrew her from the Catholic school and insisted she get married. Otherwise, Aurore would have given up her worldly possessions and the family estate would have been lost forever. Religion was not valued during the era which was also known for its focus on science and development of technology and the people in Aurore's community were mostly superstitious.

The book demonstrates a class system that splits its ranking between wealth and morals. When Aurore was a teen, she and a medical student named Stephane considered marrying. They knew their families would never agree. His family was not as wealthy as hers; and since her mother had been a prostitute, his family considered her not morally fit to marry. Aurore tried to stick to her morals when she met Aurelien shortly after her son Maurice was born. Despite her desire and love for him, she remained true to her marriage with Casimir. Later, she saw Stephane for medical help but ended up having sex with him and getting pregnant with her daughter, Zoe.

The story shows that history repeats itself, even though situations may differ. For example, Aurore held a grudge against her mother for leaving her with her grandmother to go live in Paris, yet Aurore did the same thing with the same result. Her own daughter held a grudge against her for moving to Paris to seek work instead of concentrating on motherhood, the societal norm. Unlike her own mother, Aurore did return to the family's country home to care for her children every other quarter. When she did, though, she continued writing, which took time away from the children. She endeavored to work around the situation by writing at night and being available for the children during the daytime hours. Her son was old enough to understand his mother's move, but her daughter was very young and perceived the move as abandonment.

In addition to dealing with concerns for her children, Aurore also had to worry about society's view of her. She really did not care what other people thought of her, but she recognized that their opinion had a big impact on her life. For instance, her brother's opinion was that women belonged at home and did not deserve to have careers. He badgered her about giving up on writing and returning home. He told her that her own children were forgetting about her to try to guilt her into returning for good. On the other hand, society impacted her life through the purchase of her novels. Writing was her source of income, so when the public bought books, she made money to support her family.

The public was also drawn to Aurore for her fondness of masculine dressing. She was a novelty to some, an abomination to others. What started as a way to get in to see plays cheaper became a tool of empowerment for Aurore. When she looked like a man, she was able to have a voice in politics when talking with other men. She was able to discuss philosophy and other topics that, at the time, were not suited for women. Getting to actively participate in the world of both men and women gave her writing a unique voice that made it popular with readers.

Because this book is written as a series of journal entries and because its characters are people who actually existed, it is important for the reader to keep in mind that the story is fiction. This gets more difficult as the plot progresses. To further complicate matters, the author incorporates the names of Aurore's real-life books into the story.

More summaries and resources for teaching or studying The Dream Lover.