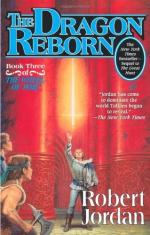 Robert Jordan
This Study Guide consists of approximately 49 pages of chapter summaries, quotes, character analysis, themes, and more - everything you need to sharpen your knowledge of The Dragon Reborn.

This detailed literature summary also contains Topics for Discussion and a Free Quiz on The Dragon Reborn by Robert Jordan.

After the battle of Falme, Moiraine takes the survivors to hide out in a pass in the mountains east of Arad Doman. She sends Verin Sedai, Nynaeve, Egwene, Elayne, and the thieftaker Hurrin to accompany Matrim Cauthon to Tar Valon, where they hope to separate him from the tainted dagger of Shadar Logoth. Rand wants to join with the fighters on the Almoth Plain, many of whom have declared support for him as the Dragon Reborn. He argues with Moiraine, who believes he will be too exposed, but Rand is also still not convinced that he is the Dragon Reborn. He has begun to dream about Callandor, the Sword That Is Not a Sword, a powerful object which is housed in the Heart of the Stone in the great fortress of the city of Tear. Prophecy says that Callandor, which is protected by an invisible force that no one has been able to penetrate or remove, can only be retrieved by the Dragon Reborn, and that the Stone of Tear, the fortress where it rests, which has never once fallen to an attack, will only fall when the Dragon Reborn comes to take Callandor.

Rand sneaks away from Moiraine and the rest of the camp, intent on going to Tear to attempt to take Callandor, believing that he will likely die in the attempt, but fearing that he will not, that he will be successful in retrieving Callandor and will be unable to deny any longer that he is the Dragon Reborn. Moiraine tells the Shienarans to wait in the pass, and takes Perrin, Lan, and Loial with her to pursue Rand, correctly guessing that his destination is Tear. She sends a reluctant Min to Tar Valon to update Siuan Sanche, the Amyrlin Seat, on what has occurred at Falme and on Rand's intention to take Callandor.

Nynaeve, Egwene, and Elayne arrive at Tar Valon with Mat, who is near death. Siuan Sanche treats the women openly as runaways, punishing them for their actions. Privately, she tells them that Liandrin Sedai, who tricked them and betrayed them to the Seanchan, returned to the Tower and staged a revolt. Liandrin and twelve other Aes Sedai stole several angreal, powerful magical objects used to enhance the One Power, and killed several Warders and Aes Sedai. Siuan says Liandrin and her conspirators are clearly Black Ajah, Aes Sedai who worship the Dark One, and she sets Nynaeve, Egwene, and Elayne the task of tracking Liandrin down. They quickly discover Liandrin made plans to head for Tear, and resolve to follow, but Elayne says that she must send a letter to her mother, Queen Morgase, telling her that Elayne intends to leave Tar Valon again. They select Mat, who is quickly recovering after being separated from the dagger and is eager to leave the White Tower, to carry the letter. On his way out of town, Mat runs into Thom Merrilin and convinces the gleeman to accompany him.

On the journey to Tear, Nynaeve, Egwene, and Elayne are rescued from brigands by an Aiel chief named Rhuarc, who says that he and those with him are searching for He Who Comes With the Dawn, the Aiel savior. Perrin, too, meets up with an Aiel, a man named Gaul, who he frees from Whitecloaks in a small town near Illian. Perrin is then joined by Faile, a young woman who is a hunter for the horn of Valere, and finds Perrin and his traveling companions intriguing. She accompanies them to Illian, where they run into the Darkhounds of the Forsaken Sammael, who is ruling the council of Illian.

All the parties converge on Tear, where a new High Lord has been dominating the government. He is actually the Forsaken named Be'Lal, and he has Liandrin and the other Black Ajah as guests in the Stone of Tear. They take Nynaeve, Egwene, and Elayne captive, as bait to trap Rand. During a pitched battle, in which an Aiel force led by Rhuarc, storms the Stone of Tear, and Mat rescues Nynaeve, Egwene, and Elayne, Rand faces off against Be'lal and Ba'alzamon. Be'lal is killed by Moiraine, and Ba'alzamon by Rand, after Rand seizes Callandor, and the inhabitants of Tear awaken to find the banner of the Dragon Reborn flying over the fortress.

More summaries and resources for teaching or studying The Dragon Reborn.