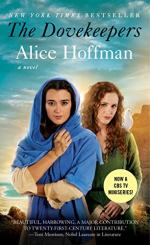 Red thread is a symbol of protection. It is also said to be the color that got the attention of the angels and God. The image of red thread appears several times during the course of the novel. The first mention comes when Yael indicates that her fate was sewn to her feet with red thread. Later, when Yael set her pet goat free, she tied a red thread around its neck for protection. After Yoav’s wife was killed, it was indicated he carried his ax around with him as if it were bound to him with invisible red silk. The red thread that Yael used to make the pattern like the one worn by the Man from the North was also said to have protective powers.

Thin Silver Amulet with the Image of Solomon

This silver amulet was ultimately the object that alerted...

The Dovekeepers from BookRags. (c)2023 BookRags, Inc. All rights reserved.