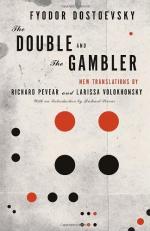 Fyodor Dostoevsky
This Study Guide consists of approximately 28 pages of chapter summaries, quotes, character analysis, themes, and more - everything you need to sharpen your knowledge of The Double.

The Double Summary & Study Guide includes comprehensive information and analysis to help you understand the book. This study guide contains the following sections:

This detailed literature summary also contains Topics for Discussion and a Free Quiz on The Double by Fyodor Dostoevsky.

The Double is a novella written by the Russian writer Fyodor Dostoevsky. It tells the tragic but comic tale of the polite and well-established titular councilor Yakov Petrovitch Golyadkin. His problems begin when his exact double enters his life and begins to take over. Golyadkin turns to his colleagues for help, but no matter whom he talks to, he increasingly feels surrounded by enemies.

The novel begins with Golyadkin waking at his usual hour of 8am. He counts his 750 rubles in his notebook before checking on his servant Petrushka. Petrushka is talking to some fellow lackeys and Golyadkin orders him back into the apartment to make breakfast. After breakfast, Golyadkin climbs in a waiting carriage and tells the driver to stop at his doctor's house.

The doctor tells Golyadkin he needs to get out and enjoy himself. At this point, Golyadkin begins to cry, rambling on about the number of enemies he has. The doctor listens with such patience that Golyadkin feels the need to apologize for his behavior before leaving the surgery. As he climbs back into his carriage, he sees the doctor watching him intently from a window.

Later on that evening Golyadkin goes to the birthday party of his benefactor's daughter Klara. He is refused entry, but manages to get into the house through the back door and hides himself in a cupboard. After much indecision, he comes out of the room and walks into the drawing room where he approaches Klara and his boss Andrey Filoppovitch. Golyadkin's nervous and disconnected speech upsets both of them and eventually two servants arrive to escort him out of the door. Once outside Golyadkin runs off into the night.

Golyadkin does not stop running until he reaches a canal. Here he sees a man approaching him who, from his clothes to his physical appearance, is his exact double. Golyadkin calls to him, but when the man approaches, he decides he does not want to talk to him and continues running back towards his house. Inside his building, he sees his double enter his apartment. After a few moments, Golyadkin goes in himself and finds his double sitting on his bed.

At work Golyadkin's double comes into the office. Golyadkin cannot believe nobody notices their likeness and asks his colleague Anton Antonovitch if he sees any similarities. Antonvitch tells him there are similarities, but it is nothing to worry about and it happens all the time. After work, Golyadkin is walking back home when his double approaches him offering the hand of friendship. Golyadkin states a need to see him sink back into the earth, but his natural politeness forces him to invite his double back to his house.

Back in his apartment, Golyadkin and his double share a meal and a number of rums. With both men slightly drunk, their tongues loosen and they share intimate secrets. Golyadkin's double tells Golyadkin how he came to St. Petersburg and how only the kindness of a Christian stopped him from falling into poverty. He writes Golyadkin a verse that touches him so much he invites his double to stay the night.

When Golyadkin wakes up his double has left the apartment. He asks Petrushka where he has gone and Petrushka says his master left an hour and a half ago on business. Golyadkin tells Petrushka he is his master and not his look-alike, but Petrushka just nods his head and leaves. On his way out of his apartment, Golyadkin meets his double and asks where he has been. His double states he is too busy to talk and leaves. At work, Andrey Filippovitch calls Golyadkin into his office. Golyadkin is just collecting his papers when his double walks into the office. He pretends to help Golyadkin before snatching the papers away and strolling into Andrey Filippovitch's office himself. After work, Golyadkin catches up with his double and tells he is playing a complicated game. His double ignores him and leaves in a cab.

Golayadkin has a series of nightmares. They begin with him enjoying great popularity until his double appears and takes away all the attention. When he wakes up, it is 2pm and he is hours late for work. When Goyladkin enters the office, he tries to get in to see his boss, but the young clerks surround him and block his path. A moment later, Golyadkin's double walks through the crowd, shaking everyone's hand before stopping to taunt Golyadkin. Humiliated, Golyadkin keeps to himself for the remainder of the day. When he sees his double leave for home, Golyadkin runs after him.

Golyadkin persuades his double to go to a nearby coffee shop and talk over their problem. His double's friendly and open attitude wins him over and soon Golyadkin is apologizing for his behavior. However, when his double goes to pay, he taunts Golyadkin by wiping the hand he had moments ago offered Golyadkin. Golyadkin leaps up from his chair and his double runs out of the shop. Golyadkin goes after him and manages to leap onto his double's carriage. The carriage stops outside Olsufy Invanovitch's house and Golyadkin watches his double enter the house before he runs back home. Back in his apartment, he finds a letter from Klara telling him she wants him to meet her outside her house at 2am.

More summaries and resources for teaching or studying The Double.

The Double from BookRags. (c)2022 BookRags, Inc. All rights reserved.